Aren’t these Marshmallow Snowmen Cute? I love doing editable fun projects in my kitchen. Now and then I get an inspiration.  I write my idea down and think about what I would need and how it would be best to go about making my idea to life.

After I assembled these Marshmallow Snowmen, I couldn’t help it, I just had to share my idea.  They are super easy, and they require no cooking, just a little time, and assembly. 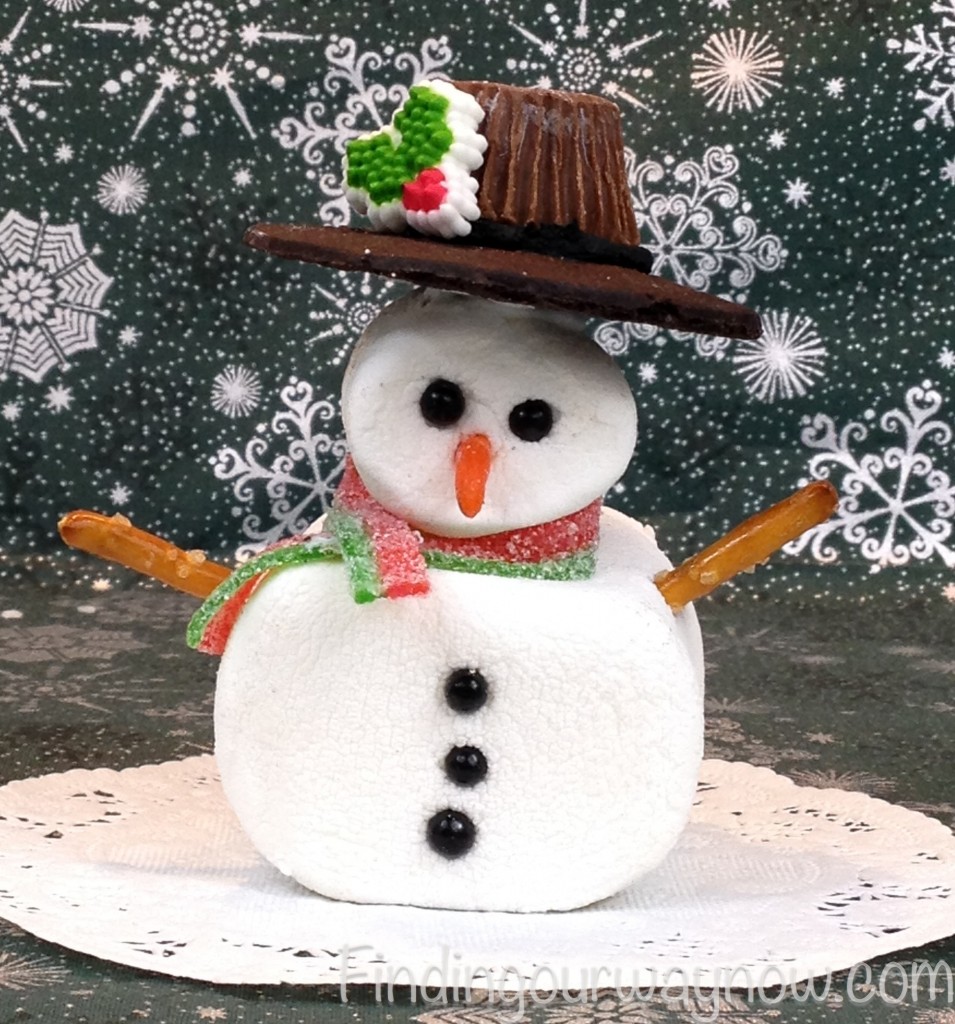 Ingredients: Make as many as time and supplies allow. 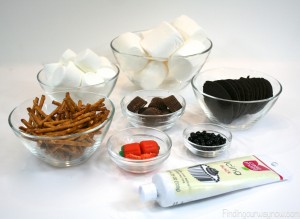 Scarf: Select a length of the tart candy ribbon, about 6 inches long. Cut in half, lengthwise.

Head:  Place the regular Marshmallow on the board to find the flat side. Push a toothpick create a hole where the two eyes and the nose would go.  Push the small black candy pearls and orange candy piece in the appropriate created holes.  Create a hole at the base of the head for later assembly. 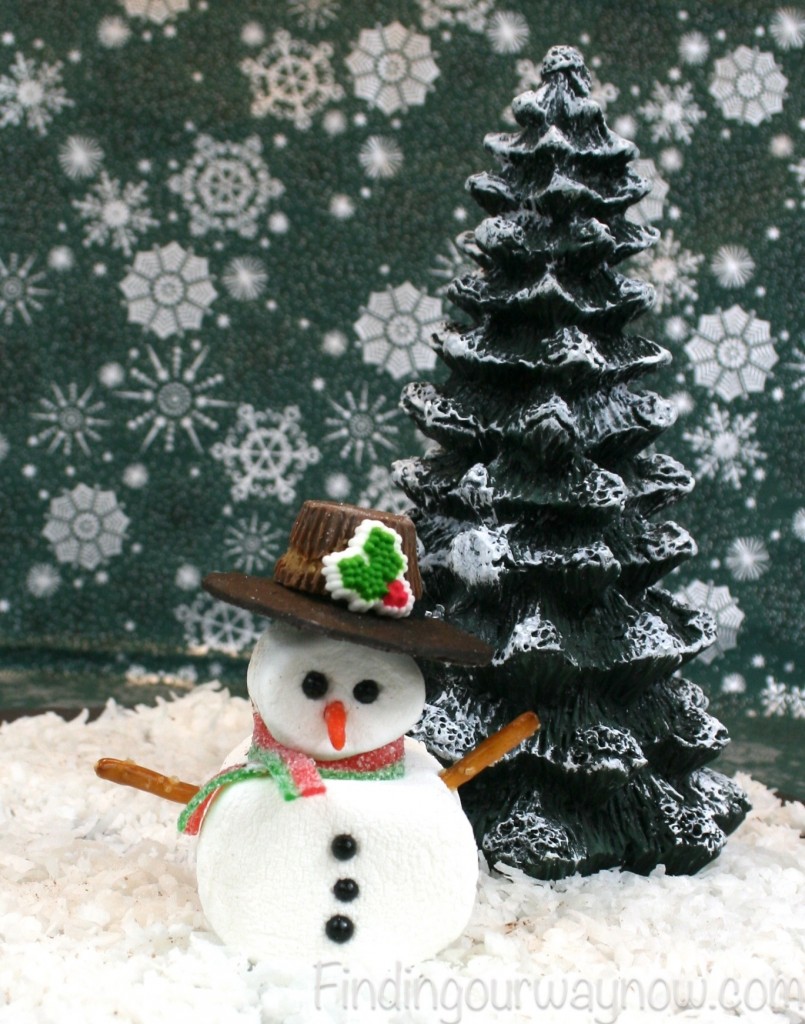 Final Step: Place each completed snowman on a tray in the refrigerator to allow the whole piece to set.  You can place them in a cupcake or cake holder to keep fresh.

Notes:  It’s important the complete each step in the order presented.  It makes this fun project go much more smoothly (believe me).  I use pretzel sticks as connectors so that the whole thing is editable and for safety, especially with little children.  For ease, I use the cake decorating icing in a tube. To make the carrot nose, I use leftover Halloween candy, candy oranges slices or jelly beans and cut and gently roll the pieces into a carrot shape. If you don’t want to use the tart candy ribbons, you can use a regular curly ribbon instead. 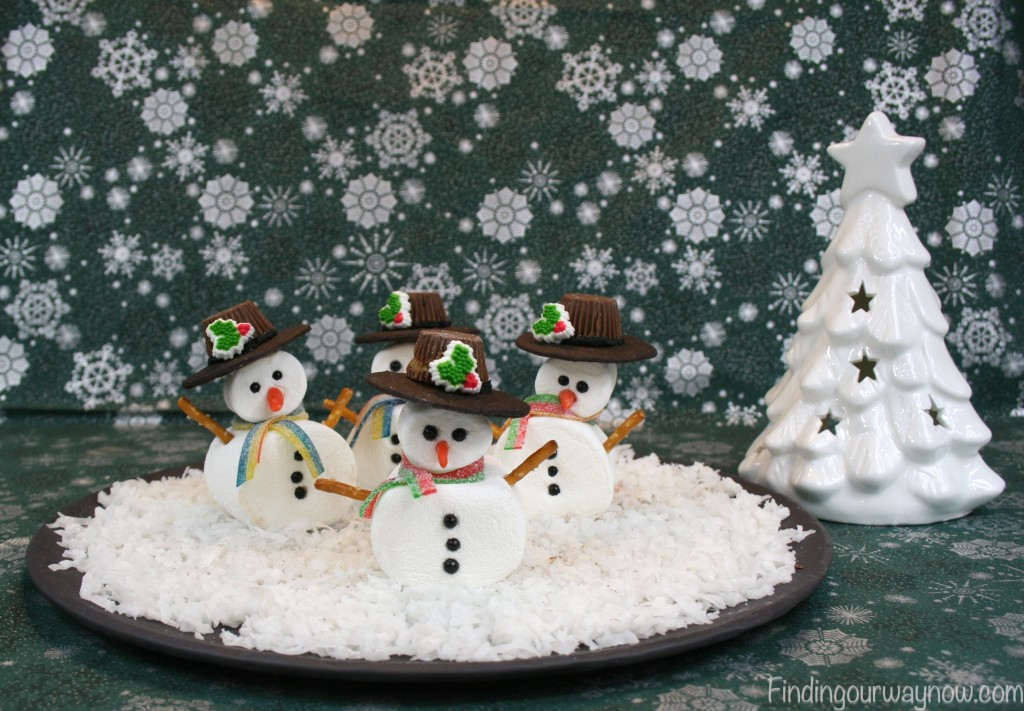 These may sound complicated, but they really aren’t.  I just wanted to provide detailed instructions to make sure you would have the best opportunity for success and provide an easy way to go about assembling these cute Marshmallow Snowmen. These Marshmallow Snowmen would be a great project to do with your kids or grandkids, heck any size kid for that matter. They also make great gifts from your kitchen, or can provide a fun an editable centerpiece for your table.  So make your list and check it twice and have some fun.

BTW: Be sure to stop by on the 24th for a special treat. I will show you my Marshmallow Reindeer.  They are so cute; you won’t want to miss it. 🙂

If you enjoyed these Marshmallow Snowmen, check out some of my others such as the Marshmallow Bunnies, Halloween Spiders & Gift Idea Recipes From The Kitchen.

P.S. Take a moment to check some of the tools I used for this “Marshmallow Snowmen” below. 🙂