Have there been times when you just didn’t like a certain food?  Spaghetti was one of mine.  I just knew that spaghetti would taste nasty.  Mind you I had never even given tried it, but that did not dissuade me from my belief.

This story was inspired by an article written by my friend Debra Yearwood at Comm Before The Storm.  So here’s to you Debra for always making me think. 🙂 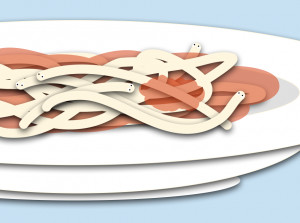 Mom or Dad would cook spaghetti once a week.  I wouldn’t even sit at the same table where the spaghetti was being served.  I would go into the kitchen and make a peanut butter and jelly sandwich and eat by myself away from the rest of the family and the offending spaghetti.

Mom and Dad were pretty patient about all this… for a while.  Then one night Dad had pretty much had it with my eating away from the family.  I think that’s what bothered him the most.  He saw dinnertime as a special time with the family.

One night when the family was preparing for dinner, a spaghetti dinner no less, he came to me and told me I would not be allowed to eat away from the table, and I would be required to at least taste the spaghetti. I would also not be allowed to make my peanut butter and jelly sandwich. 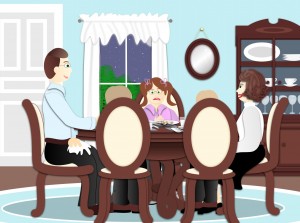 I was NOT a happy camper.  He made me sit at the table with a plate of spaghetti before me.   He had one rule.  All I had to do was to eat one fork full of spaghetti.   I sat there and stared at the offending plate of what I perceived was worms.  I was very close to gagging.

The family finished their meal.  I was left alone at the table to eat my forkful of spaghetti.  My plate of food was getting colder by the minute.

What made it even worse was Dad had made my very favorite brownies and had set them in the middle of the table where I could see them.   He told me that if I did what he asked I could have a brownie.  I sat there staring at the spaghetti  while the rest of my family went about their business.  The brownies were starting to get the best of me.

I had to make a decision.  Dad had said that if I did that one thing and I still hated spaghetti that he would not bother me about it again.  However, I would still have to eat with the family, which he would not waver on. I thought that if I put the forkful of spaghetti in my mouth all at once and swallow REALLY fast, drink a big glass of water, it would be done. I could get the whole ordeal over with then have a brownie. 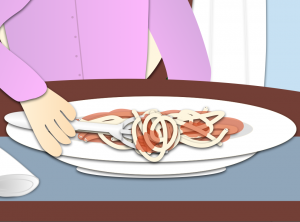 So I picked up the fork and removed as much of the offing stuff as I could get away with.  I could see Dad watching off to the side.  Still feeling a bit squeamish and with a full water glass at the ready, I held the fork, mustered up enough courage to stuff it in my mouth.  Then I did it.  At first I thought I would gag, but to my surprise it tasted pretty good.  Not wanting to admit that because, just maybe Dad might be right, I hurried up and swallowed the spaghetti and gulped down some water. Dad sat down next to me and said, “Didn’t taste too bad, huh”.  Not wanting to give anything away, I shrugged my shoulders and said, “it was ok” in as nonchalant sort of voice.  Dad took the plate of remaining spaghetti away and then placed not one but two extra large brownies in front of me as my reward.  I was thrilled.  I thought; “yeah, glad that’s over”.

The next week rolled around, and it was spaghetti night.  I sat at the table as Dad had asked.  A plate of spaghetti was placed in front to me.  My brothers were watching with much amused curiosity.  I picked up my fork and began eating my spaghetti.  My brothers giggled, Mom shushed them. Mom and Dad acted as if it were just an ordinary family meal.  I have loved all things pastas ever since. 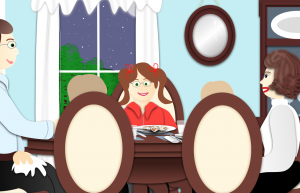 The lesson is simple.  Never judge something until you have all the facts.  In my case what the spaghetti really tasted like.  When you’ve done that, sometimes you may have a complete change of heart.

Have you had an experience like that? Have you had a situation where you were forced to face or taste something where it changed your opinion?  I would love to hear your tale.

PS: If you enjoyed my “Spaghetti Saga” story, check out Fortune Cookie, A Father’s Advises and Fear – A Four-Letter Word.