There are some stories that stay in the annals of a family history.  They are told and retold always with the same reaction.  Such is the case with my dad and his home brewed beer.

So take a moment, set back and enjoy my story or podcast about my Dad’s Home Brewed Beer.

I had come home from college between semesters.  It was the usual event with little fanfare just a regular college student returning home for a bit.   What wasn’t usual was the discussion that was going on between my mom and dad about dad’s new enterprise, his making of home brewed beer.  My dad loved his beer and wasn’t always able to have it because of the cost.  So he decided to brew his own. 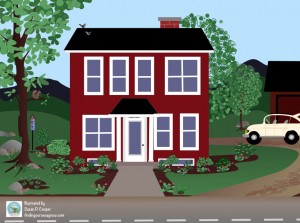 My mother was a southern belle and objected strongly to having any beer in the house, much less to have it be brewing there.  But my dad was not to be denied and went ahead with his brewing anyway.  Our family lived in a three-story house, so the beer was relegated to the basement out of the main part of the house.  That at least made it somewhat palatable for mom.

By the time I arrived home, dad’s first home brewed beer was just about ready.  He was hardly able to contain himself.  In the next few days, my dad deemed his first batch of home brewed beer ready for consumption.  My brothers and I were asked (required) to give it a taste.  My mom was not pleased, but she had resigned herself to the fact that it was going to be.

All I can say is Dad’s first attempt at brewing beer was ‘interesting’.  It was OK, but my Dad was genuinely excited about his final product.  He declared it a success.  He went on to say how he knew that each batch would improve.  Just a little bit more of this and that and he knew it would be perfect. Mom just sighed and rolled her eyes. Over the next week or so, he shared his beer with anyone who visited and who dared.  The fact that dad was so thrilled with his first home brewed beer, made it hard for anyone, my brothers and I included, not to join in and share in his delight.

As I left for college, he mentioned that the next time I would be home he would have an even better batch.  My mother rolled her eyes and grumbled uncomplimentary thoughts under her breath.  I just smiled at both my parents. 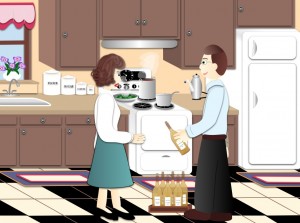 In a few months, I was back home for summer break.    Dad’s beer production was in full swing, and he had beer bottles everywhere throughout the basement in all stages of fermentation.  After I had settled in, Dad handed me a glass of his newest concoction.  It wasn’t bad. It was beer, but the alcohol strength was pretty high.  Regardless, he was pretty pleased with himself.  My mother had long since given up on trying to remove the offending beer out of the house.  She simply chose to ignore the whole affair.

Dad’s most recent batch was in its final stages of fermentation. He had bragged about beefing up the yeast in the process.  He was positive this would be his triumph and couldn’t wait for it to be ready.

It was the night before my dad’s beer was to be reveled.  I had been reading in bed. It was pretty late, and I was thoroughly enjoying the fact that I had no finals or classes to worry about for the next few weeks.  I was also thinking about dad’s home brewed beer and how tomorrow was the day the beer was to be revealed.  There certainly was a lot of it.

I put the book away and turned off the light.  I was settling down to sleep when I heard a rumble.  It wasn’t an unusual sound because our home was very close to the main road.  But this was different; it didn’t stop.  In fact, it grew louder. The house shook and rumbled.  It felt as thou the house was preparing to take off.  All l could think was what the heck!   As you can imagine, it woke the whole house. The rumbling quickly climaxed into the sound of a final BOOM!  That’s when we noticed it, the smell, the unmistakable bouquet of a particularly strong beer.

I went out in the hall.  Mom and dad were there and mom was seriously not in a good mood.  We made our way from the top floor to the basement. As we descended the beer smell became stronger and stronger, and so did my mother’s displeasure.  Dad was pretty quiet. 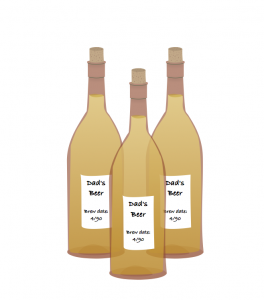 As we came into the basement, we starred at a jaw dropping sight.   The beer was everywhere.  Glass, corks, and crates were strewn all over the basement.  Then one of my brothers looked up and pointed. The force of the explosion had blown the corks out of the bottles like rockets and embedded them in the ceiling.  We couldn’t help it; we started to laugh.  Mom,even in her furry, couldn’t help but follow suit.

It took quite a while to clean up the mess from the beer explosion, even longer to rid the house of the beer smell.  It was a good thing it was summer, and we could leave the windows open.  Miraculously a few bottles had been spared, and they were pretty darn good.  But alas that was the last of dad’s home brewed beer enterprise.

Not long after, mom had decided that it was ok for dad to have his beer but he was no longer allowed to make his own home brewed beer.

My brothers and I still laugh about that night the house took off and the cork embedded ceiling. Memories like these are priceless and are to be cherished.  This one in particular always makes us laugh.  My mom and dad are long gone. These memories help to keep them alive in our hearts and minds when we gather as a family.

If you liked this, check out Tale of Three Farmers, What Friends & Flowers Have In Common and Reflections by Thomas Ross. Enjoy.