Our perceptions or assumptions can be a great help, a hindrance or a conundrum. I have a friend who calls perceptions snapshots, a picture if you will, of something that sticks with us that we hold on to; good, bad or indifferent. Sometimes, if we don’t take the time to look a little deeper, we can develop a very mistaken point of view.

Assumption, A Dog & A Rabbit

A few years back, my husband and I were out to dinner with another couple, friends of ours. My husband’s friend was the head of animal control for a very large county and always had some interesting stories to tell. This night the couple happened to be a bit late. When they arrived they were both laughing and said “Boy, do we have a story for you”. 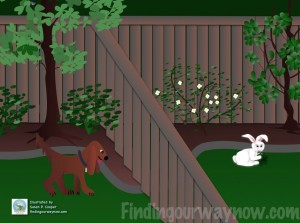 Our friend had employees who were friends with a couple who owned a dog. The couple’s dog liked to jump the fence of the neighbor next door and try to play with the neighbor’s big white pet rabbit who was often in the neighbor’s backyard. The dog never hurt the rabbit. He just wanted to play. The couple’s dog would race around and just wag his tail at the rabbit. Even still, this was obviously a problem for both couples, but somehow they were able to coexist. The two couples and neighbors never got to know each except for the occasional fence jumping and separating of the two pets. This went on for a few years.

The couple with the dog had come home late one night and let the dog out to play in the back yard. They were tired and paid little attention to their dog’s activities. They heard the dog frantically barking and growling and went to see what was going on. In their dog’s mouth was the white rabbit. The rabbit wasn’t moving; he was really dirty and the rough for wear and tear. They were horrified and panicked. OH MY GOODNESS, our dog has killed our neighbor’s pet rabbit. 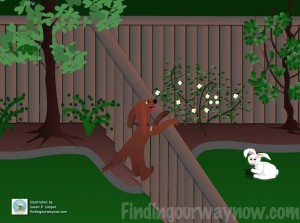 The couple removed the rabbit from their dog’s mouth, put it in a box and stared it. Their dog just whimpered and was acting very strangely. The couple asked; “What should we do?” They talked for a long time wringing their hands, feeling terrible about the rabbit. The big question was what WERE they going to tell their neighbors.

In the meantime, they had noticed that their neighbors weren’t home, and it appeared that they hadn’t been when their dog had jumped the fence. The couple came up with an idea. They talked about it for a minute, deciding what they would do. 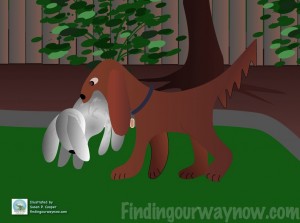 The couple washed the rabbit, blew-dried his fur, combed and fluffed him up to make him look like he was still alive. It was a masterpiece. Leaving their dog in the house, they snuck over to the absent neighbors backyard and carefully place the cleaned up, fluffed up rabbit in a place he would usually play. Then they snuck back to their house and waited…, and they wait… for what must have seemed like a terribly long time. Then they heard the other neighbors arrive…, and they listened. Nothing happened. So they went about the evening but kept an ear open for any noise just in case they heard something. 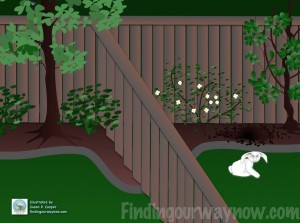 Then it happened. The woman neighbor started screaming. She was obviously very distraught… DUH. The couple stared at each other and decided they needed to go ASK “Whatever was wrong.” Leaving their nervous and agitated dog in the house, they went out to their adjoining fence, peered over they saw their neighbors staring at the fluffed up dead rabbit. Their neighbors were frozen in place not moving towards their pet. They were just staring at it. Then the couple asked in the most casual voice they could muster; “What’s wrong?.” The woman neighbor stared at them for a bit and said. “He came.” The couple with the dog looked at each other, and then the dead rabbit and asked; “What do you mean?.” The neighbors explained; “What we meant was our rabbit passed away yesterday and we buried him near his favorite spot. When we came home, there he was…. ,” pointing to the fluffy dead rabbit. All the couple with the dog could say was “Oh.” The neighbor’s husband then moved towards their deceased fluffy dead rabbit. He realized the rabbit was still dead. He looked upset AND very confused.

We later learned the couple had surmised that their dog had jumped the fence found the grave of his rabbit friend and dug him up. The dog was upset that the rabbit wasn’t moving and brought him to them for help, which explained his strange behavior. The couple never did tell their neighbors what they had done, how could they. They just keep it their private secret. The rabbit was reburied in a different place. A new fence was put in place of the old one; a higher fence this time so that the dog couldn’t find himself over in their neighbors yard.

Sometimes it pays to “dig” a little deeper before we make a snap judgment or assumption, doesn’t it?

Have you ever taken a snapshot of a situation, made an assumption or developed a perception that later surprised you with a very different point of view? I would love to hear your story.

If you enjoyed “Assumption, A Dog and A Rabbit,” check out Perceptions and Chickenpox, Childhood Perception and No One Was Watching.