Have you ever had homemade marshmallows? I went in search of the best recipes I could find and actually tried seven different versions. The one that I had the greatest success with was a recipe from the Food Network’s Alton Brown. With some tweaking, a few trials and errors, this is the recipe I now use and quite literally is no fail. Once you’ve had homemade marshmallows you will never want the store-bought kind again. They aren’t hard to make, but they do take a bit of patience and some waiting time. The end result is so worth it.

When I think of marshmallows, I think of campfires and s’mores. However, once I had a homemade version in place of the store-bought kind, I had a much different view of these lowly white clouds of sugar and gelatin. 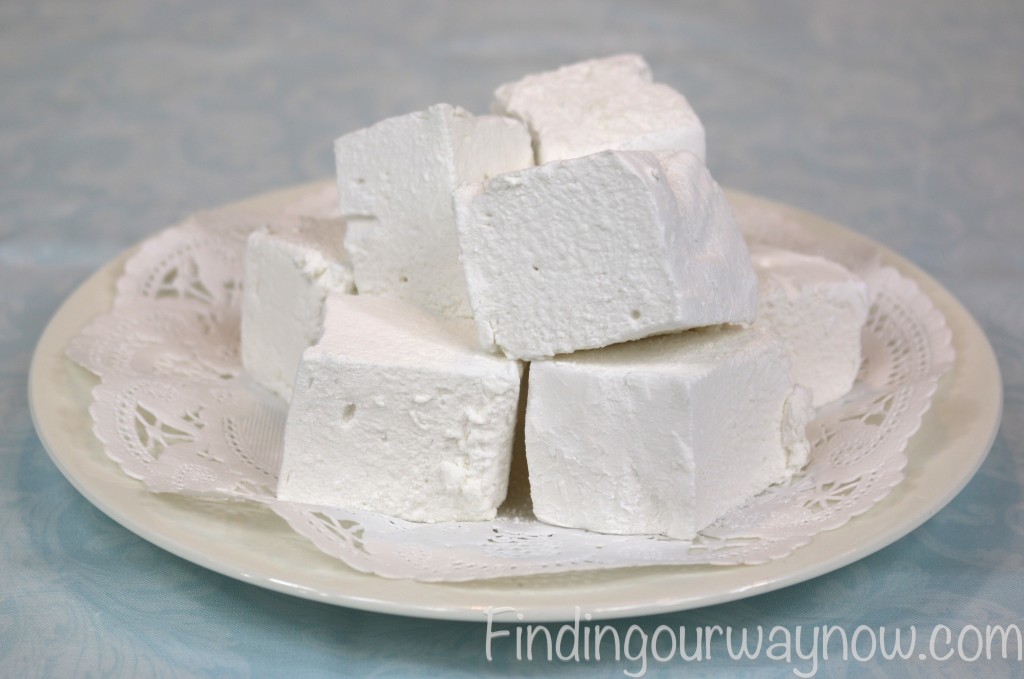 Lightly grease a mixing bowl and whisk of a stand mixer. Place a 1/2 cup of water and sprinkle the gelatin evenly over the water. Attach the whisk attachment to be at the ready.

Grease an 8 by 8-inch baking or marshmallow pan. Combine the confectioner’s sugar and cornstarch in a small bowl. Generously coat the pan with the sugar and cornstarch mixture making sure to completely cover the bottom and sides of the pan. Return any loose mixture back into the bowl for later use.

In a small high-sided saucepan, combine ½ cup water, granulated sugar, corn syrup and salt. Place the mixture over medium high heat bringing it to just a bubble, then cover, allowing it to cook for 3 minutes. DO NOT stir. Uncover, clip a candy thermometer to the side of the pan and continue to cook until the mixture just reaches 240 degrees F. Again, DO NOT stir or scrape down the sides. Once the mixture reaches the right temperature, remove immediately from the heat.

Turn on the mixer with the bloomed gelatin on the lowest speed. While the mixer is running, slowly pour the hot sugar syrup down the side of the bowl into the gelatin mixture, gradually increasing the speed a little at a time. Once you’ve added all of the syrup, gradually increase the speed to the highest setting. Continue to whip the mixture for 14 minutes.The mixture becomes thick and fluffy, and the mixing bowl should be lukewarm to the touch. Add the vanilla and whip for 1 more minute.

This is the hard part. The mixture is VERY sticky so it helps to use a lightly greased spatula to assist in removing the mixture to the prepared pan, quickly spreading it out as evenly as possible. Lightly cover the top with some of the remaining sugar and cornstarch mixture. Keep the rest of the dusting mixture for later. Allow the marshmallows to sit uncovered for at least 4 hours, overnight is preferred.

Once cured, carefully remove the marshmallows from the pan onto a cutting board and cut into 1-inch squares using a pizza wheel lightly greased and dusted with the cornstarch confectioner’s sugar mixture. Once cut, lightly dust all sides of each marshmallow with the remaining mixture. Store the marshmallows in an airtight container for up to 3 weeks.

Notes:  Make absolutely sure the marshmallow pan is completely coated and dusted very well; otherwise removal will be more difficult. The sugar mixture is super hot, to avoid a serious burn, be very careful when carrying it to and pouring it into the mixing bowl. The amount of air you beat into the mixture matters. More air makes them lighter in texture, less can make them denser and not as cloud like. This homemade marshmallow mixture is quite sticky; so don’t miss greasing the spatula. It may be a bit of a challenge so be patient. It’s worth it. Doubling this recipe can be problematic, unless you have a super sized stand mixer. It’s best to make one batch at a time. 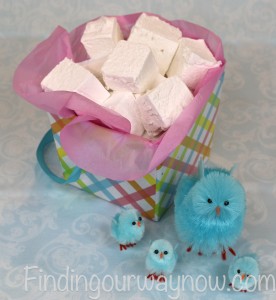 These homemade marshmallows may sound difficult, but they’re not. Once you’ve made your own you will be very hard pressed to buy them at the store, they really are that good and so worth the effort and time. For something totally decadent, coat the marshmallows with chocolate. With a few bits and bows they make an excellent gift from the kitchen. So jot down the ingredients and get out that mixer and make a bunch.  Enjoy.

Have you ever had homemade marshmallows? What did you think? Would you try making your own?