I believe most of us want to make a difference in this world in some way or another.  Some work hard to pave a path that will ensure they’re remembered for their good deeds.  Most of us plow 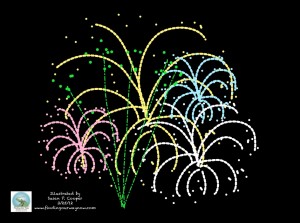 through life trying to create a good life for ourselves, our families and anyone close to us.  We hope that somewhere along the line we’re able to leave a mark that will say we made a difference.

Sometimes we aren’t even aware when we’ve had a positive impact on a person.  It could be something we may have said at just the right time that resonated with a person.  Most often, there aren’t any fireworks or fanfare that will mark that occasion as momentous.  It seems to simmer and percolate for a while, sometimes for years before it manifests itself as a life changing statement or circumstance.  Many times the person who was responsible for this “making a difference” event will never know its effect.  Nor will they know the ones where they provided that special something that would prompt someone to make a positive change in their life.   Now and then we get the chance to see, hear or are even be given credit for having made a difference at a time when it was most needed.

To Make A Difference

I was a brand new teacher.  “Green as Grass” is the term they used.  It was my second year of teaching first grade and some of the enthusiasm for the job had started to wear off.  The demographics of my school were extreme, truly showcasing the haves and the have-nots.  The school was located almost across the street from the state prison.  Some of my first graders had fathers or “uncles” who were serving time in “The Big House”.  The other half of the class came from the wealthy side of town, and these children wanted for nothing. 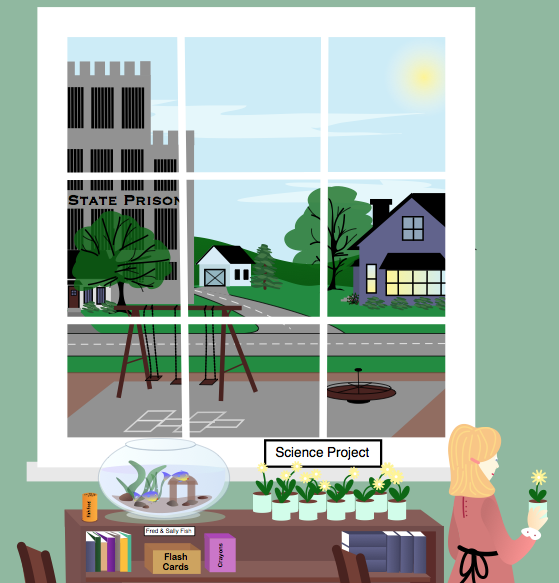 My classroom was at the end of the building, and we had a picture perfect view of the prison from my classroom windows.  At times, the location of the school offered some unwanted entertainment.  Such as a prison riot or two or a prison escape.  When these things occurred, the principal would get on the intercom warning all of the staff and children to stay clear.  As you can imagine, that guaranteed that everyone would head over to the prison to stand across from the prison to see what was going on.  Because the prison was so much a part of the town, everyone took any event such as these in stride and with good humor. 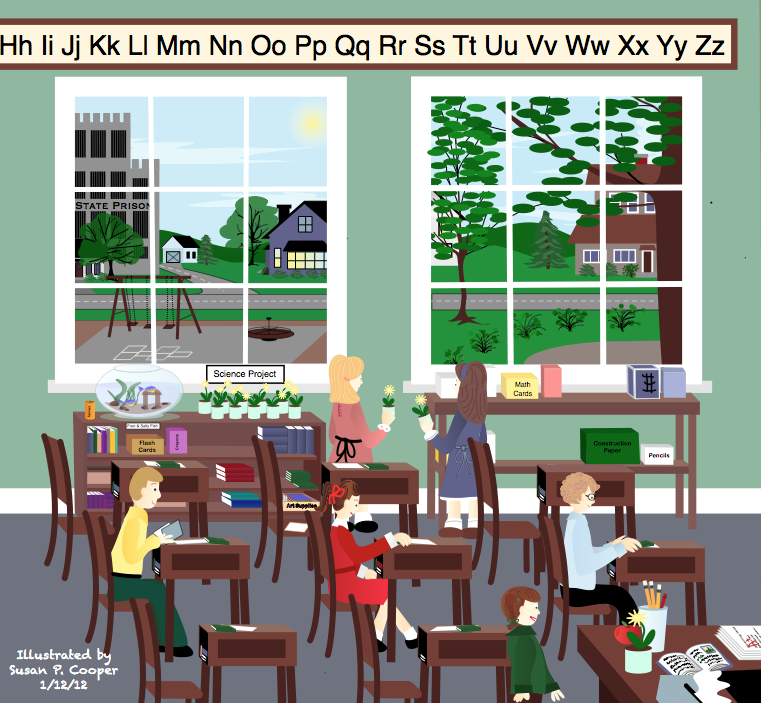 It was the first day of school, just following summer break.  My new class were just arriving.  Some of the children were accompanied by parents; some were by themselves.  I had spent a great deal of time preparing the room for my new charges.  Everyone had a desk with their name on it and a general set of supplies to give them a good start for the year.  The room was abuzz with nervous energy, trepidation and fear of being in a strange place. When the bell rang, all the students were at their desks waiting for me to begin.  We did the standard introductions, giving me an opportunity to assess who my students were and from where.  That is when I meet Frankie.

Frankie was a beautiful boy.  He had dark brown hair, these amazing blue eyes, and a gorgeous smile.  He had been held back in kindergarten for various reasons one of them being poor socialization and behavior.  He was seven at the time he entered my class and would turn 8 towards the end of the year.  Despite that, he was no bigger than the rest of the children who were younger them he.  His tests all indicated he was very bright, well above the average, but he expressed little interest in making an effort to learn.  The records also showed that he came from a large family of all boys, some his siblings were half-brothers. His “uncle” (father) was in prison.  Frankie was to be excused once a month for a few hours to allow him to visit his “uncle”.

The first week of the school year was uneventful.  The children were settling in nicely to the route, and it was time to start working towards the goal of teaching each of them to read, write and learn basic math skills.   That was when the trouble began with Frankie.  He flat out refused to participate in anything that would help him learn what he needed to succeed.  It was like pulling teeth to get him to do 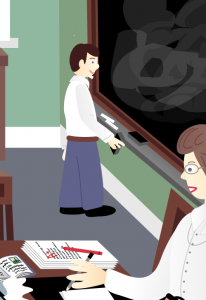 anything meaningful.  To make matters worse, he was always getting into trouble on the playground.  As a result, he spent a lot of time after school in detention.  That also settled into a routine.  He and I would spend the hour or so after school together.  I, grading papers and taking care of my lesson plans, he cleaning the blackboard, straightening the room and, when I could, get him to work on some of his studies.

At first our conversations were one-sided. I asked a question he answered with a shrug or a word or two.  As time went on Frankie started to open up some.  I learned he didn’t like going to see his “uncle” (father).  His father paid very little attention to him, and he felt the lack of affection.  His mother was OK, but she was always busy and had little time to spend with him.  He obviously felt alone.  That was when it occurred to me that he didn’t want to go home.  He liked staying after school.  Having a conversation with me gave him something he craved, attention.

I’m not sure when it happened, but I do know it was sometime after Christmas.  I had asked Frankie what he wanted to be when he grew up for the millionth time.  But this time he answered with “a race car driver.”   I remember getting up from my desk and going over to where he was and setting next to him.  I asked him what he thought he needed to do to become a “race car driver”.  He mumbled around and said he wasn’t sure, but he would be one anyway.  That’s when I said; “You need to learn to read to know what the gauges say on the dashboard.  You need to learn your numbers to understand the speed and different things that affect what you are doing.  You also need to know how to write so that your pit crew will know what you want when you’re not there with them“.  Frankie answered with “How can I do that when I’m so dumb.”

Frankie and I talked or a long time and came to agreement.  He could stay after school with me as long as he stayed out of trouble and made an effort to learn what he needed to achieve his goal.  He was true to his word.  By the end of the year he had done well enough to go on to second grade.

Frankie always struggled in school but was able to pass to the next grade each year.  I keep tabs on him until he graduated to middle school and then I  lost touch with him.

A little while had past.  I was in a teachers meeting when a colleague mentioned that they had heard Frankie had gotten into some kind of trouble and was placed in juvenile detention.  I was heart broken.  I had high hopes for Frankie and had so desired he would make it in life, to make his dream come true. 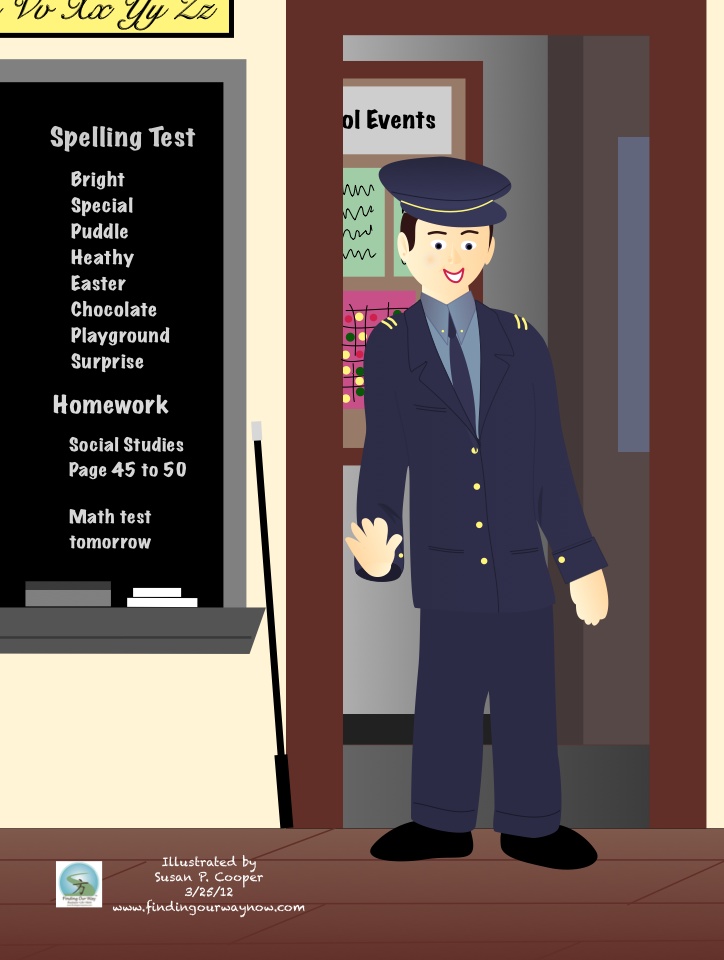 A  few years past, I had moved to another school and it was my last year of teaching.   The year was coming to a close and my classroom was vibrating in anticipation of the coming summer break.  I had just finished up the day and the kids were leaving to go home.

I heard someone call my name and looked up to see who it was.  In my door way was this really handsome young man in a marine uniform.  He said “Hi, You probably don’t remember me.  I’m Frankie your after school buddy.  I was always in love with you when I was in your class”.  An then he smiled that gorgeous smile I remembered so well.  We hugged each other and we sat and talked for a very long time.

I learned he actually hadn’t gotten into any kind of trouble but he was remanded to juvenile court because his mother was no longer able to take care of he and his brothers, who were now in foster care.  He was given an opportunity to go into the service where he could continue his education which would help him achieve his goal  “To Be A Race 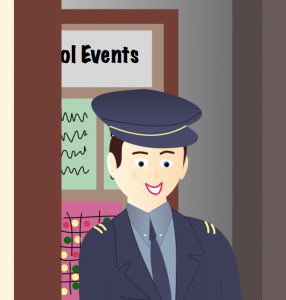 Car Driver”.  Before he left he made one last remark.  “I will always remember you saying over and over again.  If you really want something, you can achieve it but you need to learn your basics first before that can happen”.   He continued with “I have done that and I will keep on doing that, so thank-you for believing in me” .

Life’s funny, Frankie was just a little boy who wanted to be understand, loved and appreciated.  Because he was difficult, most were not willing to give him a chance.  Frankie taught me to always look for the best in someone.  Never give up on a person unless there is no other choice.  You just never know what you may be able to do to affect a positive change, now or in the future, whether you’re there to witness it or not.

That was the last time I saw Frankie.  I would like to think he achieved his goal.  If he did I will know in my heart that I played a part, that I made a difference.

Have you ever had a time where you were given a rare opportunity to see and know that you, indeed, had a chance to make a difference?  I would love to hear your story.

If you liked Pretend Listener, check out Childhood Preception, Is The Bus Here Yet, and Milk Can Lesson.

P.S. Take a look at some suggested reading and tools for a website and blogs below.