Life will often offer up so many opportunities in some of the most unexpected ways.  These opportunities are often accompanied with life lessons that we will carry with us for a lifetime.  The story I am about to tell is one of these about how we shouldn’t judge a book by its cover.

So here is my story.

Judge A Book By Its Cover?

We lived in West Virginia, and I had left my teaching career to pursue sales.  Don’t get me wrong, I loved teaching.  We just couldn’t justify my continuing what I was being paid, even with a Master Degree.

My first few years in sales were one big education for me.  It was not at all what I had expected, and I soon realized that I needed to educate myself on the tools of my new trade.  I was lucky,  I had excellent teachers and mentors.  Some of the basics they taught me were never to assume … anything.  Be very observant, always ask questions and listen carefully to what the individual (hopefully a client) had to say; it sounds so easy, doesn’t it?

I was just starting to learn the ropes of all the products and sales approaches that would work, things I could say and do that felt comfortable.   I was selling savings and investment programs to school teachers.  I was starting to get the hang of it and was enjoying the feeling of the (limited) success I was having.   All of my appointments were at the home of a potential client, teachers who needed help saving money from their very limited resources.

All of my appointments were set by phone.  I would set up time and date that would work for each teacher to discuss what I had to offer.  They would give me the directions to where they lived.  Because of the distance between houses and housing developments I never knew just what kind of situation I would run into.  In time, I became familiar with each area and knew what to expect.

It had been a very busy couple of months.  I had been selling very small contracts to many teachers showing them a way to save money for their various needs.  In many cases, this had been the very first time they were able to save money.  That felt good to me.  I was able to help them see a way to realize a dream, and I was making a (very small) commission for each sale.  It was truly a win-win for everyone.

I had set an appointment with the Jones in an area I was not familiar with called “Briar Wood Estates.”  The fact was I had never heard of it before.  I had met the Jones, husband and wife teachers, at one of my seminars.  They were a white couple in their fifties and were looking to talk to me about what I had to offer.   In my conversation with them they had given me VERY detailed instructions as to how to get to their home.  At the time, the detail they had given seemed a bit odd.  Nevertheless, I set the appointment and planned for our meeting. 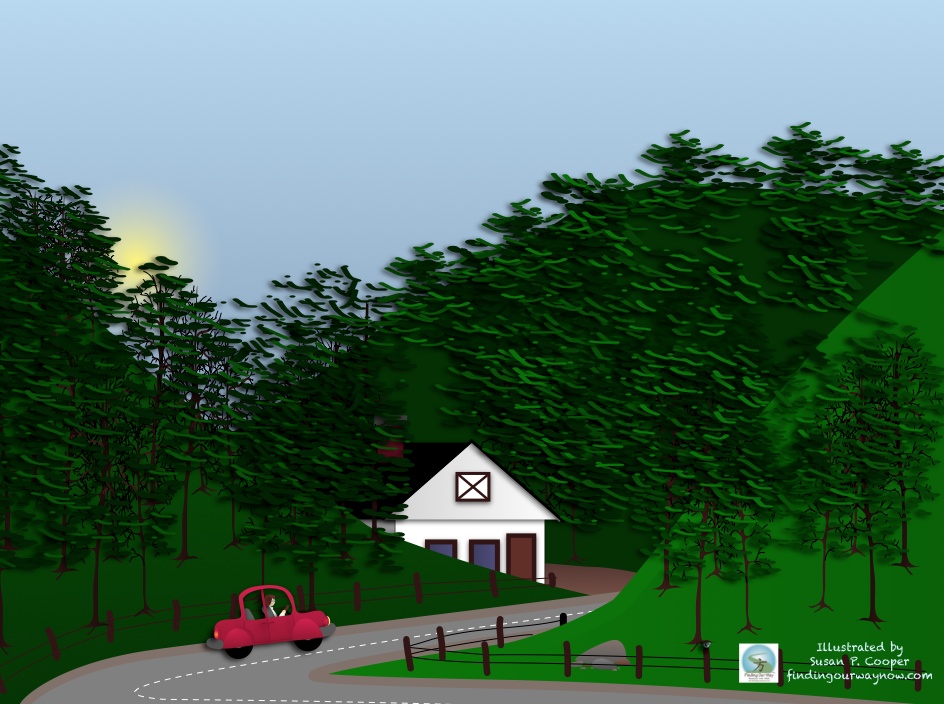 The day had arrived, and I was just finishing up with an appointment, preparing to leave for the last one of the day, the Jones at “Briar Wood Estates”.  I called ahead to confirm our appointment.  A very young girl answered the phone, stating that the Jones weren’t home but that they were expecting me.  I pulled out my map and directions.  The location wasn’t on the map, so I had to rely on my handwritten notes (GPS wasn’t yet available).  I estimated that I was about 45 minutes away from my appointment.  I had an hour so I felt comfortable that I would be on time if not a bit early.  The road to the appointment was mostly freeway.  I saw the exit and felt comfortable that my directions adequate.  I turn off the a main country road that then turned into one lane, then to gravel, and then to a dirt road that was barely a road but more like a path.

I was certain I was lost.  I was fortunate because there was a gentleman walking beside the dirt lane.  I told him I was lost and asked if he knew of “Briar Wood Estates” and the home of the Jones.  He laughed and said he did, and I was indeed on the right road.  He told me to go about a mile until I saw a large tree and make a right. I was to continue (on yet another dirt path) where I would run into “Briar Wood Estates” and then I would see their house on a hill to the right. 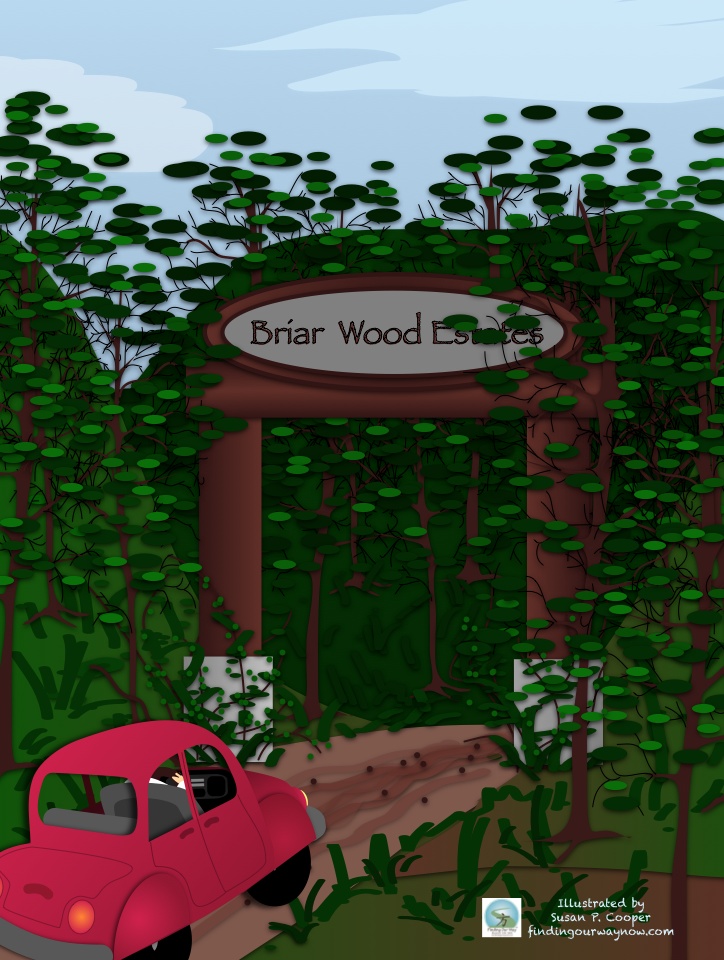 I continued on the dirt path until I saw the every large tree and made a right.  The fact was you could only make a right.  I continued on for maybe another half mile until I came upon a large overgrown entryway sign that read “Briar Wood Estates”.  It looked like an entrance to a high-end housing development but it was out in the middle of nowhere, and there were no houses to be seen.  I continued on the dirt road.  At this point I was thinking I had to be out of my mind.   In just a short bit I could see the house in the trees on top of a hill.

In front of me was a very steep driveway that was a dirt path with ruts so deep that I worried I wouldn’t be able to get my car up the hill.  As I stared at the rutted driveway, I seriously considered turning around and calling to make some excuse why I couldn’t make the appointment.  A thought occurred to me “Maybe I could walk up to the house”.  It had rained earlier that day making the rutted driveway muddy, so I ruled that out.  Then I thought for a minute and said to myself  “I’ve made it this far, how bad can it be?”  So against my better judgment, I started up the hill.  My tires slipped and in all the wrangling to get my car up to the house I lost my muffler.  I was beginning to get mad at myself and at the people who had brought me here.  It seemed insane to me to do all this, all for a small contract with a commission that wouldn’t even start to pay for a new muffler. 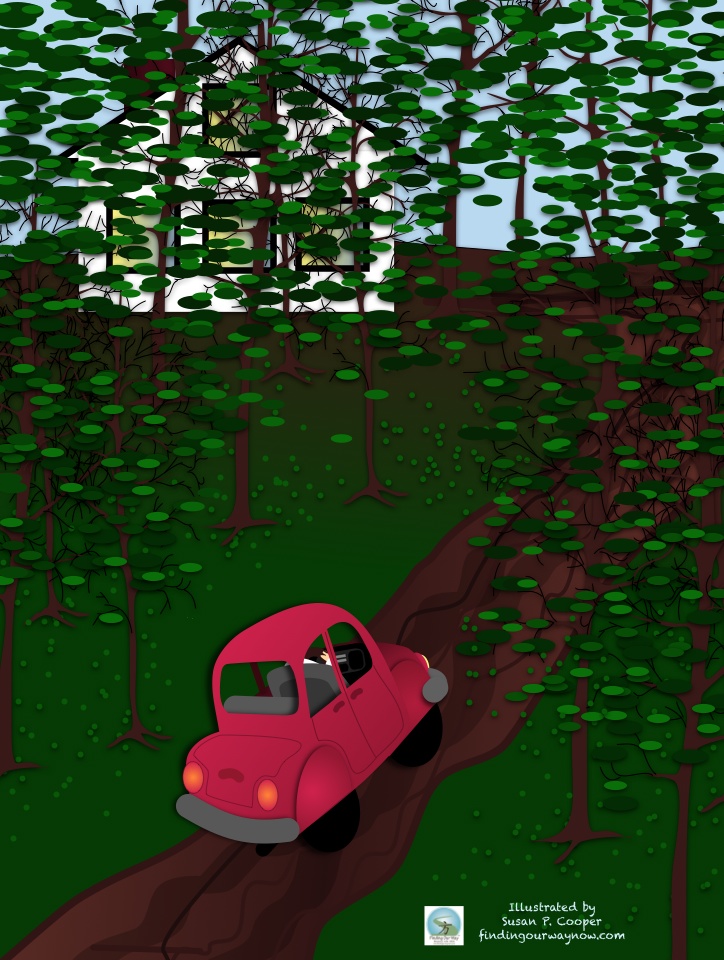 I finally made it.  When I crested the hill, what I saw was nothing short of amazing.  In the front yard was a pond.  Halfway in this pond was a rusted tractor that looked as if it had been stuck there for a very long time.  Flying over the tractor were chickens of various colors.  The yard was nonexistent with weeds that were high enough to touch the mid part of my car windows, AND there was no sign of that anyone was home.  I pulled the car up as close to the house as I could.  I got out of the car and walked on a wood plank sidewalk to the makeshift steps that lead to the front door.  I was now more curious than I was mad.  All I could think was “Holy Cow, this had better be good”.  I knocked on the door.  My knock at the door was answered immediately.  Standing before me were two beautiful little black girls who asked if I were Susan. They invited me in telling me that their “mom and dad” were running late, and I was to wait for them.  Now I was utterly confused. 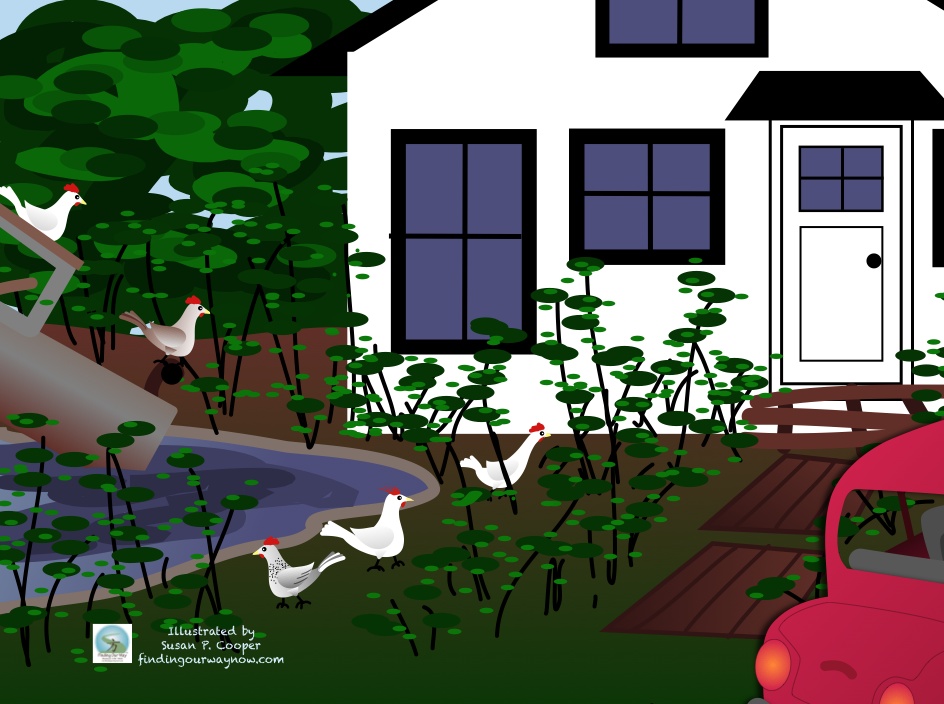 The little girls were a delight.  They were working on a school project and obviously needed some help, so I pitched in while I waited for “their parents”.

It was over an hour before the Jones arrived home.  They apologized profusely for making me wait and were VERY appreciative I had been able to make the appointment.  We were setting at the kitchen table chitchatting about their school, class and general items we all discuss when getting to know someone.  Nowhere in to conversation was there a mention of the two little girls or why they lived where they did.  I certainly didn’t feel comfortable asking but my curiosity was peaked.

In the back of mind I was certain that this was going to be like all the rest of my appointments, a small contract to help them with whatever they saw as their need.  As a result I was not as attentive as I should have been.  Through the process of determining their interest in signing up for the program. I had assumed a number that I thought fit there circumstances.  When it came time to determining the amount on the contract I asked what it was they had in mind.  When they said the number I thought I was hallucinating.  I know the surprise registered on my face.  Mr Jones asked me if I were all right.  I nodded yes and asked him to 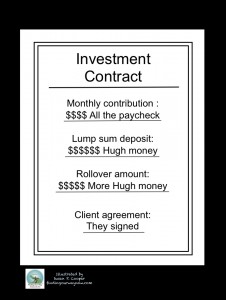 repeat the number to ensure I hadn’t made a mistake.  He smiled and said that I had heard correctly and if that was ok the he and his wife would like me to be the person they would work with.  I was flabbergasted.

Mrs Jones had gotten up to prepare dinner.  They insisted I stay.  I called my husband to let him know I would not be home for dinner and why.    My nerves had settled and we were seated for dinner.  Throughout the conversation I learned that the two little girls were members of their church.  The little girls biological parents had abandoned them and the church had taken on the responsibility of finding them a new home.  The Jones were in the process of adopting the two girls.  The house they now lived in had been their son’s who had long since moved away.  They moved into the house to preserve the property.  The development “Briar Wood Estates” had gone bankrupt right at the time the house was under construction.  The reason they had chosen me to handle their (sizable) portfolio was because I had a great reputation with their peers AND I was the only one who actually agreed to come to their home. 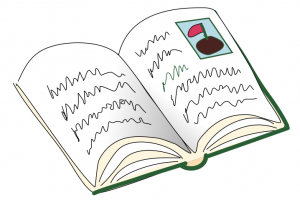 As I readied to leave, we discussed another time to meet to review other items they would like me to handle.  We hugged and I left to go home.

It was the biggest contract anyone in my division had delivered in recent years.  It was also a huge responsibility.  The Jone family and I became very close friends and we remained in contact until I move to California.   Where the money came from I will never know but I will always be grateful for their trust and belief in  me.

I learned so many lessons from that experience.  The biggest one was never ever judge a book by its cover.  We just never know what will happen or what we might find if and when we are willing to take a look.

Have you ever had a circumstance like this that taught you to not be too quick to judge or “Judge A Book By Its Cover”?  I would love to hear your story.

If you enjoyed this story/muse check out Was That Really Today?, An Assumption, Tale Of Three Farmers: Story and Perceptions.