I had written this story,”Grocery Store Aisle Hogs,” a very long time ago for another blogger. With Holiday shopping season in full swing I was reminded of this story. I thought it would be fun to share it with you. 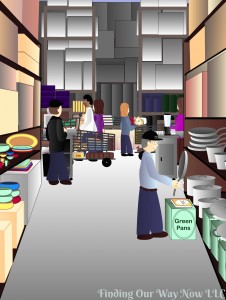 Don’t you hate those able-bodied people who just don’t know how to, or won’t, get out of the way? I call them grocery store aisle hogs. Not too long ago I found myself playing bumper carts at a big-box membership grocery store. Monster-size grocery products big enough for an army lined the shelves of aisles that spanned the width of three carts. It was an insanely crazy Saturday. Kamikaze housewives, missile-seeking seniors, and kids looked for the food stations and everything else in between. I had debated whether to go because I knew it would be wild, but there I was with my husband in tow.

My husband loves everything about cooking and headed to check out the new cookbooks and the cookware section, wisely avoiding the busier sections of the grocery store. Armed with my list, I headed into the madness. Even as busy as it was, generally speaking, people were polite and willing to move out of the way when asked. That said, all was going well and I thought I could actually get out of the store alive and in good time.

I only had a few things left and started down the last aisle. I didn’t get far. In the middle of the aisle, a cart was parked cross ways, blocking both directions. The first thought that flashed through my mind was “Seriously?” A smallish woman stood in the only opening, but she seemed to be in deep life-changing thoughts regarding which case of canned tomatoes she should select. 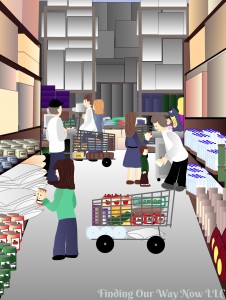 I approached and asked politely if she would move her cart, which would allow me to pass. She glared at me and said no. At first it didn’t register, and then I wondered if I had heard her correctly. I was also processing what I should do. The bottled water I needed was just beyond her aisle-hogging cart. Should I turn around and go all the way around? That would be a pain because each end of the aisle was a zoo with food stations on each end and on either side. I felt tempted to ram her cart and wondered what would happen. Should I wait her out? By the looks of it, waiting her out could take a while. Meanwhile a line was forming on each side of the grocery store aisle hog.

Out of the corner of my eye, I noticed a person walk past me. He was a huge man, and I mean he was really tall and Hulk-like. Tattoos covered both arms, and he wore a T-shirt with Gold’s Gym emblazoned on the back. As he passed me, he smiled and said, “Pardon me.” He walked over to the blocking cart, looked at the wide-eyed, gaping- mouthed woman and said “Ma’am?” and picked up her cart and moved it aside. He looked over at me and said, “That should help.” 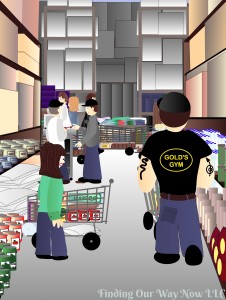 I knew my face registered what was going through my mind. All I could think was how awesome the act I’d just witnessed was. With such simple and effective words, aided by his the size and strength to pull the act off, the aisle now stood open. This whole episode only took a few minutes, but it was entertaining.

I didn’t dare laugh, but I smiled a huge thank you to my new giant savior. My hero went back to his basket parked behind me, following me as I proceeded down the aisle. As I was walking past the offender, the woman’s husband walked up. I overheard her telling him in a loud and obnoxious rant about how rude the giant and I were. 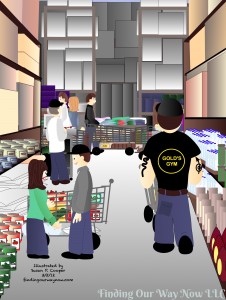 Her husband looked at her basket, and then he looked at me and my hero. “Were you in the way?” he asked his wife.

I burst out laughing.

“That’s beside the point.” She glared at me and my hero, the chuckling giant of a man standing behind me. “You see what I mean?”

The gentle giant helped me pick up the two cases of bottled water I needed, and then I texted my husband to let him know I was heading to checkout. Boy did I have a story to tell him.

When I find myself in a similar situation, I chuckle. Remembering what happened, I use my gentle giant’s magic words and viola I am on my way.

P.S. If you enjoyed “Grocery Store Aisle Hogs,” check out Part 2: Man and His Pan, Nugget Markets: Not An Ordinary Market and for a bit of fun Pretend Listener.