Don’t you love ghost stories? It’s October and Fall is officially here, as we begin to settle in and prepare for shorter days and colder nights. Soon, the trick-or-treaters will be donning scary costumes, carting around paper bags or pillow cases and scouring the neighborhoods, while looking for their bounty.

As a contributing story for Susan and in the spirit of the season of ghosts and goblins, I thought I would share some strange phenomena. They’re tales of wild imaginations and strange things that happened in this old house of my grandparents along with a true story my mother told me many years ago.

They took place in the early days of my youth and my mother’s story happened later, early ‘70’s, shortly after my grandmother had died. My parents were the only ones who remained in the old homestead as final estate arrangements were being made. The house looked much different then, with its shingled siding and tin roof, and has since been remodeled by the current residents.

Over the years, there was much we had experienced and shared but this time the old house had the last say in bidding us farewell. The story goes like this, and I hope you enjoy it.

Ghost Stories From an Old House

It was the home where my mother grew up in a small beach town in Virginia, situated on main street and only 2 blocks from downtown.

You wouldn’t think the house would be “haunted” just to look at it. And, oh, what would it say, if it could talk? “I remember that family ― the small, frail man and the large, strong, endearing woman. She understood me.”

Not only strange phenomena were captured in the house but the joy and laughter of children, as well, along with evening prayers and the smell of fried chicken every Sunday.

It was a typical, modest two-story house with connecting bedrooms upstairs and one bath. Being the first-born of five, my mother earned the distinction of having the largest, back bedroom closest to the bathroom.

On the main floor was the living room (or parlor as they called it in her youth) followed by the dining room, kitchen and back kitchen. There were front stairs in the living room and another set of stairs in the back kitchen that went up to the second floor. You could circle the house running up the front stairs, through the bedrooms, down the back stairs to the front again.

As a child, my mother remembered family funerals held in their home with the deceased laid out in the parlor. Can you imagine going upstairs to bed knowing there was a body in your living room?

My grandparents’ backyard was joined by one particular, an old Victorian-style house that was converted into a funeral home. The funeral director had a wooden, lapped-sided building he used to embalm bodies and store coffins in that connected to my grandfather’s garage and work shed. In his younger years, my grandfather helped the funeral director retrieve bodies of people mostly when they had drowned or died in accidents.

From our side of the yard, his building bore a large window with closed blinds, a door with an ivory handle and keyhole. It was particularly creepy on those nights when the light was on in his building casting shadows across our backyard. Curiosities were peaked, and we knew he was working on a body.

My mother told us when they were children, she and her brother had found the door open to the building one day, and it didn’t appear anyone was around. So, they went in to investigate. When they stepped through the door, they saw a body on a table. As they got closer, it let out an “ahhhh”, and they flew out the door and ran back in the house.

I know explanations of a story like this would probably be childish talk or embellished tales, but it didn’t diminish the strange feelings of spiritual energy that were always apparent. It was especially eerie those nights when the light shone after my grandfather’s death, and years later after my grandmother died, for we knew it was where their bodies were being prepared.

All were invitations for mysterious imaginations of young minds with a psychic grandmother, who felt unseen energies and heard unspoken voices. It was a comfort for her to feel close to those she loved, who no longer lived in this physical world.

When the back door suddenly slammed one night, while everyone was watching TV, she took my hand and went with me to check it out. When we found the door securely locked, including the latched screen door, she told me what she thought it meant and talked of spirits moving about.

Such was the perfect setting for the telling of many ghost stories. From gasps caused by bumps in the night to clocks ticking IN the wall and phantom silhouettes knocking at the door, more stories would emerge. Or, from a hung antique-framed portrait that seemed to illuminate my grandma’s precious 18-month old baby, in death, looking as if to sleep peacefully.

He was so young when he died of pneumonia. It was a time before penicillin was discovered. Grandma told us his clothes were just laid on top of his body in the picture though it looked as if he was normally dressed for bed.

In the middle of the night, when my cousins and I tipped-toed downstairs in the dark and passed through the living room to the kitchen to get something to eat, our eyes would catch the image of his white nightgown in the oval, concave picture. It appeared to glow on the wall. Needless to say, the 7 of us would hold onto each other hastening our steps.

One of those nights, when we were downstairs eating, grandma decided she would play a trick on us since she knew we were scared of the dark and the strangeness of the house.

We were at the kitchen table fixing ‘PBJ’ sandwiches when she sneaked down and flipped a switch turning all the lights off. We scrambled and ran in all directions, tripping and turning over chairs in the dark.

One of the glass cupboard doors was open, and I happened to hit and shatter it, as I ran. We all heard the glass, and grandma turned on the lights right away to find me bleeding.

One of the pieces of glass cut above my right eye. Though the cut looked nasty, it was only on the outside of my eye and not an emergency. The bleeding soon stopped, everything was cleaned up and, with the excitement over for the night, we lumbered back up to bed.

In the old house, another perfect setting set the stage for a story when my grandmother told of getting up to answer the door late one night. As she stood at the top of the stairs, she could see from the street light, cast on the front of the French door below, a silhouette of someone standing on the front porch, knocking. It was her mother.

As she hurried down the stairs to answer the door, the form disappeared, and the phone immediately rang. When she answered, she was told her mother had just died in another town many miles away ― news of another loved one that passed on to the other side.

There were many inexplicable events that made me stop to wonder about the world that was invisible to me ― not to mention how it scared the heebie-jeebies out of me. It explains why my sister, cousins and I stayed up playing cards every night, praying for dawn, while listening to our grandparents’ slumber and for any noises or sudden shifts in the settling house.

The years passed, and only grandma and grandpa remained in the house, older and more fragile. Only one last ghost story was told of that house in the early ‘70’s by my mother shortly after grandma’s death, her last remaining parent.

Mom and dad were still staying at the house shortly after grandma was buried, pending estate closure. It was in the wee hours of the morning with a hint of dawn on the horizon. They were sound asleep in my mother’s old bedroom.

All of a sudden, both were shaken from a deep sleep by loud knocking. Still in shock and half asleep, they thought maybe it was someone at the front door. No, it was knocking on the window ― their second-story window! And, it didn’t stop there.

It continued all around the house moving from window to window knocking, paralyzing my parents with fear. Then, just as fast as it started, it stopped, and all was still and silent. The knocking was never heard again.

It’s hard to discern what it was or its meaning. Maybe, if my grandmother were still alive, she would have an explanation, as she always did, “there’s going to be a death in the family” or something else like, “the spirits were at play.” My mother and dad never stayed long enough to figure it out.

Last summer, when my cousin stopped by for a brief visit to the old homestead and its current residents, she told them our grandparents had lived in the house. Just out of curiosity, she asked them if they ever heard noises. Their expressions immediately changed and they looked uncomfortable. The sons abruptly left, leaving their mother and my cousin to finish their visit. Nothing more had to be said.

Decked out with its new windows and siding, it still has its mysteries and, while the spirits are having fun playing tricks, the old house continues telling stories for those who will listen and pass them on.

Our imaginations ran wild, as kids, but it’s a whole other thing when we’re adults and experience things beyond what we’re capable of explaining. For us, these were those times and, maybe, you have ones you’d like to share, too.

Thank you, Susan, for the opportunity to share this with your readers. It’s an honor to be your guest over here.

Life’s journey continues with Pat from the ‘ol kitchen table — for more stories from Pat go to “Plain Talk and Ordinary Wisdom.”

If you enjoyed “Ghost Stories From an Old House,” check out Halloween At Our House, Scary House, and The Witching Hour. 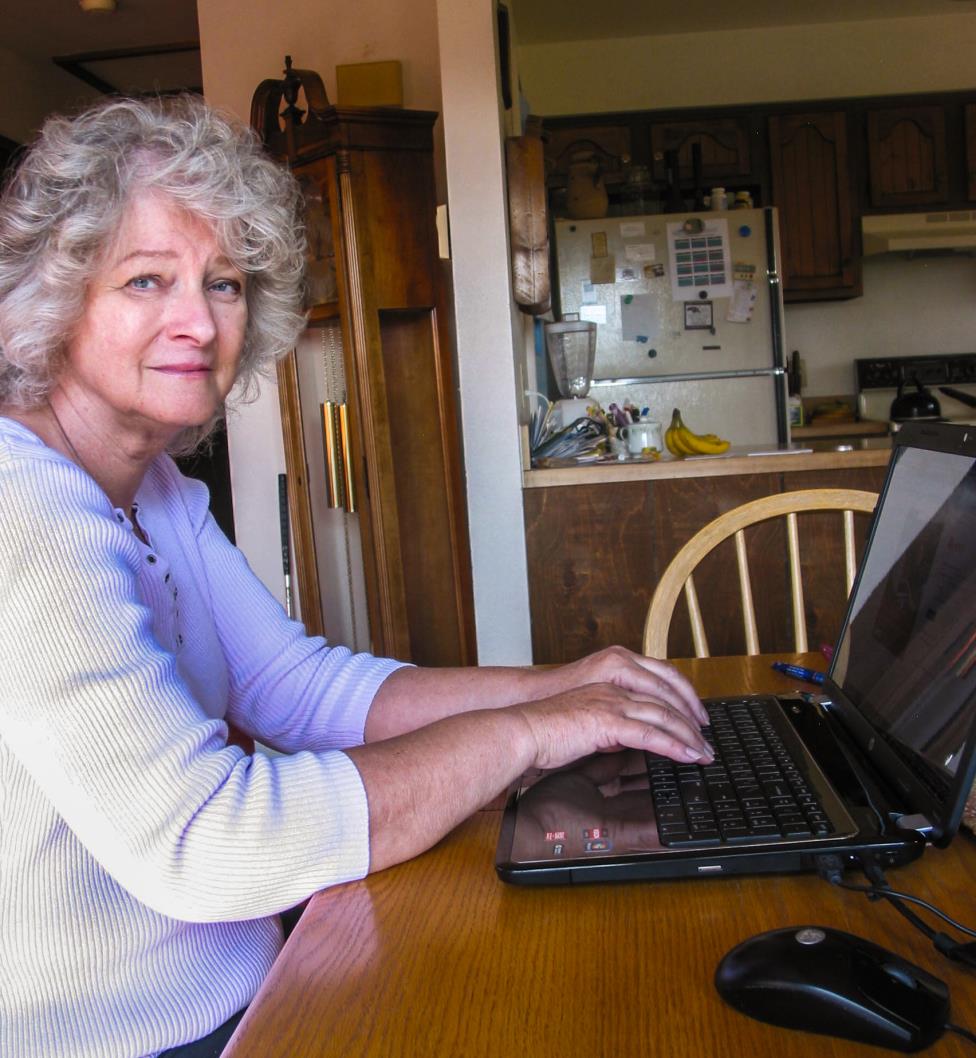 Description
Pat Ruppel is a contributing writer for Finding Our way Now LLC. Is it possible to make a difference in the world? Pat believes one way is through writing to inspire and warm the heart. That is what she hopes to do on Finding Our Way Now and her own “Plain Talk and Ordinary Wisdom”. When we're most relaxed is with family, friends, catching up or exploring conversations with new people, that’s when magic happens. Pat believes anything is possible, when we find a common bond, whether it’s talking around a kitchen table or writing a story. That’s when hearts are touched and connections are made where we identify with one another enough to trust and share.
Author
Pat Ruppel
Previous Post: Marshmallow Bumblebees: #Recipe
Next Post: Homemade Halloween Cookies: Recipe