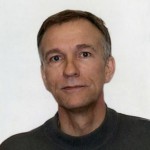 It is my great delight to present a guest post about “Seven Words” from Paul Graham @The Daily Wail, someone I’d met on LinkedIn and a person I greatly admire. Paul will tell you he is sometimes satirical, sometimes serious. Paul loves to share his perspective on news items and social phenomena both great and small. I will let Paul take it from here.

Frankie and The Seven Words

At fifteen, Frankie functioned like an overgrown ten-year-old. In those days that was not quite slow enough to warrant special treatment, so he was just put in the lowest academic stream where happy oafs were the norm and disinterest in study only a matter of degree.

As team mates on the rugby squad, I admired his cheerful tenacity and we shared an enthusiasm for bashing people without legal consequences. Frankie was drawn to anything that required more daring than common sense and became a useful accomplice to my youthful misdemeanors.

Straight “Fs” in everything but Art precluded further education so at the end of the school year he would need work. His widowed mother, with limited English, knew little of the options available so, having anointed me his leader and dismissing the fact that where I led him was astray, he sought my advice.

Although Frankie struggled in school, he responded to one-on-one instruction by rugby coaches or minor delinquents and when he finally got something it seemed to stick. So, I explained the concept of apprenticeship and told him to spend the weekend deciding on three jobs for which he might like to be trained. He would give me his list, then I would get the contact information and help him fill out applications and type cover letters to spare the recipients his illegible scrawl and abysmal spelling.

The following Monday he presented the fruits of his deliberation. 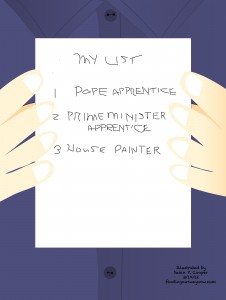 Frankie had not grasped that apprenticeship was directed to the manual trades, as the only one of those on the list was House Painter. The others, demonstrating the spectacular gap so often found between aptitude and ambition, were Pope and Prime Minister!

Never one to rain on a parade, or forego an opportunity for mischief, I gravely applauded his fine choices and we set to work. I advised Frankie that, in order for his personality to shine through, he must compose the letters himself and that I would simply correct the spelling and copy type his wording. It was a safe bet that the grammar and composition would provide some harmless levity. I told him a little about the incumbent Pope and Prime Minister and cautioned that his chances were negligible but, as he was undeterred, the only guidance offered was that he should include: What do you want? How are you qualified? What’s in it for them? Who are your references?

The Vatican neither seized the opportunity nor saw fit to reply to a letter that, albeit naïve, was clearly sincere. Frankie’s growing disappointment as the weeks rolled by gave me a practical lesson in why every job applicant, however delusional, should have the courtesy of a response. I resolved that all my future enterprises would respect this and that resolution remains intact.

The Whitehall correspondence left a vivid impression and I have recounted it often enough over the years to remember it almost verbatim: 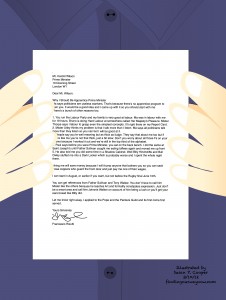 Why I Should Be Apprentice Prime Minister.

Ma says politicians are useless wankers. That’s because there’s no apprentice program to train you. It would be a good idea and I came up with it so you should start with me.

There’s a bunch of other reasons too.

Hiring me will save money because I will thump anyone that bothers you so you can sack those coppers who guard the front door and just pay me one of their wages.

I can start in August, or earlier if you want, but not before the Rugby final June 10th.

You can get references from Father Sullivan and Tony Walker. You don’t have to call him Mister like the others because he teaches Art and formality constipates expression. Just don’t be a smart arse and call him Johnnie Walker on account of him being a lush or you’ll get your ears boxed like Billy did.

Let me know right away. I applied to the Pope and the Painters Guild and its first come first served.

To their credit, the PMO was gracious enough to respond, apparently with tongue planted as firmly in their cheek as that of Frankie’s agent: 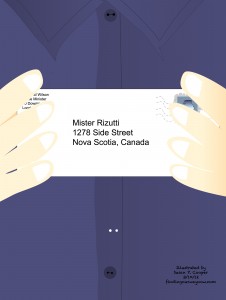 We thank you for your interest in the position of Prime Minister but must advise you that we anticipate no vacancy in the foreseeable future.

The importance of training elected representatives is noted and we assure you that the Civil Service is at pains to do so.

Office of the Prime Minister 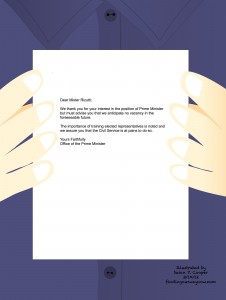 While taking a wicked delight in Frankie’s loftier ambitions, his need for gainful employment was not neglected. I pursued the House Painter option relentlessly, typing references to his impeccable character for signature by the Art Teacher, Rugby Coach and (in exchange for two lengthy … if not entirely comprehensive … confessions) the somewhat skeptical Father Sullivan. The good priest’s agreement to overlook Frankie’s shortcomings in return for Frankie overlooking the Vatican’s was secured by quoting his own recent sermon themed ‘The devil makes work for idle hands’ I expressed my deep concern that, absent a useful trade, the lad might fall under the influence of scoundrels. The withering glare upon which I was impaled confirmed that the logic was persuasive. I then obtained recommendations on Frankie’s aptitude as a painter by providing his labour at no charge for three elderly homeowners. The fact that each had failing eyesight and limited capacity to assess quality was, I admit, not entirely co-incidental.

With these steps completed and a rudimentary level of competence established through trial and error, I created applications and cover letters for which Frankie’s contribution was restricted to the signature. Despite many rejections, persistence paid off. Frankie accepted my assurance that if we learned something from each failure it would bring him one step closer to success and eventually landed a suitable position where slowly but surely he became skilled, valued and contented.

So what is the takeaway from this heartwarming tale? Aside from the usual platitudes about perseverance and the fact that even facetious little hoodlums sometimes have their uses, your attention is drawn to seven little words that I employed for this purpose. My success rate has always been much greater for both personal and business objectives to which I added them than to those where I neglected to do so. As Frankie would say, ‘It’s right there on my Report Card.’ 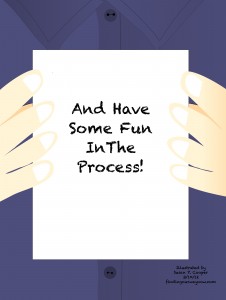 So heed these seven words from a largely reformed delinquent … And Have Some Fun In The Process!

(Names have been changed to protect the innocent. Except for mine and that of former Prime Minister, Harold Wilson. Both of us are guilty as charged.)

Wasn’t that a great story? What are your takeaways from Paul’s story? Do you have seven words that have significant meaning to you? Do you have a story you would like to share?

P.S.: Check out the cool books below.