My second year blog anniversary is approaching in a week or so.  I could write about all that I’ve accomplished and give you some interesting stats, but I thought I would tell you a tale about a “Little Train That Could” called Finding Our Way Now instead.

A few years ago, in a faraway place, there was a girl who wanted do to something different, and go on a new journey. It wasn’t clear what she should do.  It started with some tinkering and then a new direction began to take shape.

In time, she was encouraged to build her dream and start on a new journey. At first she was fearful and thought; will I succeed? One thing led to another and her train was built and put on the tracks to begin its journey. She named it “Finding Our Way Now”. It was a momentous occasion for the girl. She had never done this before, and now she was the driver of her new little train. She had a few passengers, but the occasion generally went unnoticed by most. 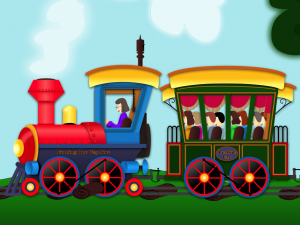 The journey started with an engine and one car.  It was pretty little train, something the girl was quite proud of. A short time passed, and soon another car was added and then finally a caboose. The little train was complete.

When flat land was reach, the track evened out and all was steady, there was a collective sigh of relief. A question was asked; what’s next?  The girl thought and reflected on her journey. There will be ups and downs, twists and turns, peaks and valleys, things will be added, subtracted and changed, but if she holds steady and true with a belief in herself she will grow and accomplish much with her little train called  “Finding Our Way Now”.

I do hope you enjoyed my tale “The Little Train That Could” called Finding Our Way Now. 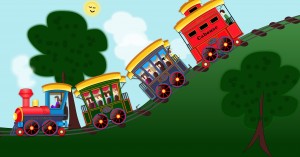 So what are some of things I’ve accomplished in my second year of blogging?  Here is my list. 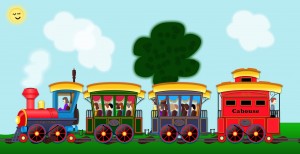 What have I learned? What I said this time last year still holds true today.

How about you? Have you ever felt like the “The Little Train That Could”? What has been your blogging experience and what have you learned? How was your year?

If you enjoyed “The Little Train That Could Called Finding Our Way Now”, check out My First Year Blogging, Fortune Cookie and Bucket List.