I do love it when another person asks to post about wine, especially someone who has worked in the wine business and a winery.  Let me introduce you to Scott Huntington.

Beaujolais Nouveau: A New Trend in Wine for Over 60 Years

This last one is of peculiar interest, as there is one type of wine, in particular, which can claim the rights to satisfy the desire for a young, fresh and new wine. It’s called the Beaujolais Nouveau, and it has been the latest trend in wine for the last several decades.The resounding “pop!” of a cork is a celebratory note of tried and true importance to those whose lives are devoted to the idea that a glass should never be empty. But for each wine drinker there is a certain set of internal rules and regulations about what makes a wine “acceptable.” For some, it only needs to have an alcohol percentage above a standard wine cooler’s five percent. For others, it needs to embody the richness of the French oak barrel with an overwhelming sense of sultry plums and aging tannins. But for a select few, it needs to exist as young and fresh, with as little time between the vine and the table as possible.

What is a Beaujolais Nouveau?

To cut the processing time down, the grapes are fermented whole-cluster. Winemakers skip the de-stemming process and hold off on pressing until fermentation is completed. Once the grapes have gone through a thorough fermentation, the berries will begin to explode at the point where the stem or pedicel, hits the berry. After that happens, grapes are ready for the press. The whole idea behind the Beaujolais Nouveau is to produce the wine skillfully but quickly. As it was originally made to celebrate the end of the harvest season, it was to be completed and released as thanks for the bounty of the harvest. In the 1980s, French law required that the wine be released on the third [thirsty] Thursday of November, which falls right around the American Thanksgiving. The resulting wine tastes excellent with turkey. The Smithsonian has more to say about the history surrounding this unique wine.

The acceptable grape for the Beaujolais Nouveau wine is called the Gamay or Gamay Noir. Its dark skin yields fairly low amounts of tannin, resulting in a wine that is garden-fresh, akin to something grown strictly through organic farming. The wine it produces is often known by its innate berry-like qualities, which connote fresh strawberries and raspberries. Gamay is grown in many regions around the world but is most popularly known for its presence in the Beaujolais region in France. Wine-Searcher.com is a great resource for more information on the Gamay grape. 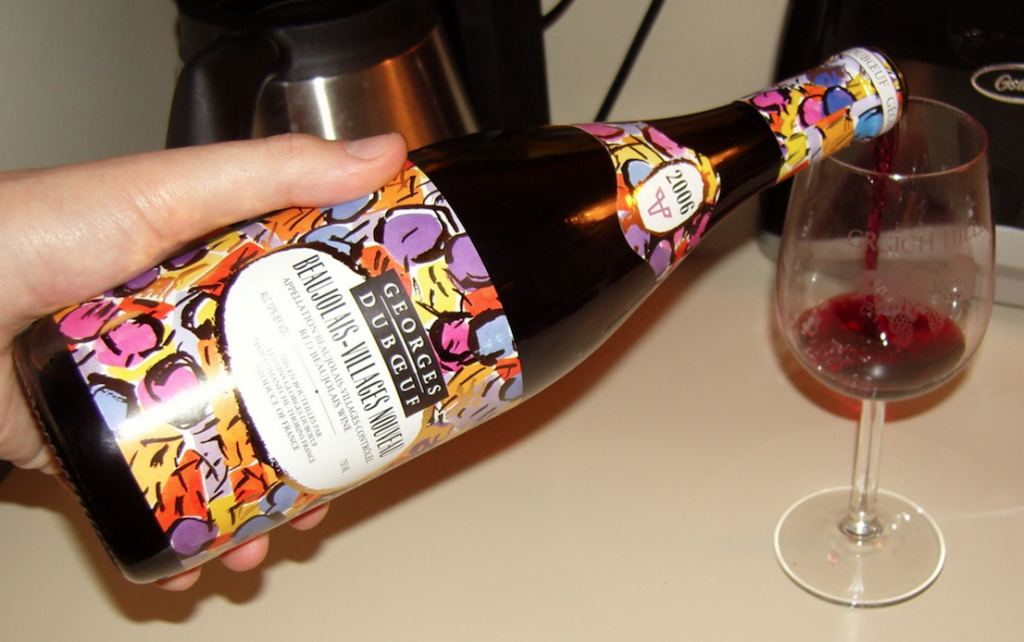 Georges DuBoeuf is known well throughout the wine-producing world. His interest in the Beaujolais Nouveau has resulted in the production of many vintages of the refreshing wine. Characteristically light and fruity, his vintages are best served chilled, rather than room temperature, to enhance the brightness of the wine. His vintages are, in fact, perfect for a variety of reasons. For those who prefer to not spend hundreds on a bottled drink, a single bottle of Georges Duboeuf Beaujolais Nouveau is rarely above $15.00. The low price means that even wine’s toughest critics can consume a bottle without feeling bad about shelling out the cash for it.

Out of the many Nouveau style wines I’ve tried, anything from DuBoeuf is always the best. You can easily spot it on the shelf due to its brightly colored label. Traditionally, Nouveau labels have incredibly vibrant labels, similar to a Pablo Picasso painting. Just from looking at it you can tell that it’s not going to be a bold, oaky red, but rather a nice refreshing wine to enjoy just to enjoy. Pick up a bottle or two at your local liquor store and let us know what you think!

That was great, don’t you think?  I so love a good Beaujolais.  I do know from personal experience that this is one to put on your list.

When time permits take a moment to find and follow Scott at @SMHuntington. 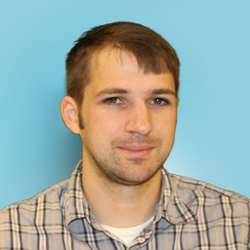 Description
Scott is a contributing writer for Finding Our Way Now LLC and a wine enthusiast. He lives in Pennsylvania with his wife and young son. He writes about a wide variety of things he finds interesting that surrounds the wine world.
Author
Scott Huntington
Previous Post: Ham and Cheese Mini Quiches: Recipe
Next Post: Gift From Santa: #Story (Podcast)