Have you ever seen a fairy?  As a child, we often see things a different way than the adults around us.  There is a purity and clearness to our perceptions that we often lose as we grow.

(Note: This story was inspired by Cheryl Therrien/Grandmother’s Diaries and her new book Letter’s From Grandma.)

I was just five and was proud of the fact that I was a big girl.  I hadn’t yet run into the prejudice that would accompany my large coke bottle bottom glass and a 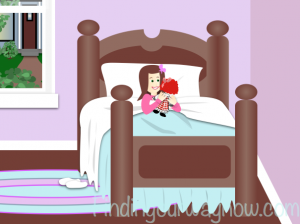 disability that had yet to show itself.   I was a happy child.  My home and family were the center of  my universe.

However, there was one thing.  I hated naps.  Every afternoon mom would have me lie in my bed to take a nap.  Sometimes I’d sleep.  Sometimes I just played games in my head or play with my doll while I lay in my bed.  This was one of those times that I just didn’t want to sleep and lay in my bed all restless and bored.  I lay on my side and could see outside the open window of my bedroom.  It was a beautiful day.  I longed to be out there playing in the yard.  I sighed and closed my eyes for a second. 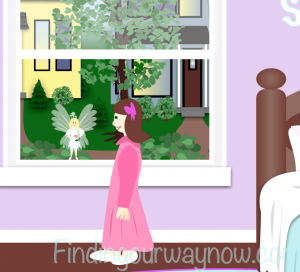 I heard an ever so slight swishing sound.  When I opened my eyes, I couldn’t believe what I saw.   She was a so beautiful, with golden hair and bright blue eyes and a she was waving at it me from the windowsill.  I smiled, and she said hi in the tiniest of voices.  I had heard of them before, had even seen pictures of them, but there she was sitting on my windowsill.

The fairy was dressed in a wispy white dress, and her wings were as big as she was. I stared at her for a moment and decided it was time to take a closer look.  As I got out of bed, she stood up and watched me approach.   I reached out to pick her up, and whoosh she was gone.  When I put my hand down, she returned.   I was so excited; I had my very own fairy.  I wanted to tell my Mom, but the fairy said I was to keep it a secret.

I asked my fairy where she lived.  She told me all about her home in the garden.  I asked if she were mine.  I even told her I would make a little house for her so she could stay with me in my room.  She shook her head to indicate none of that would do.

We talked for while about her garden home and how she lived among the flowers when they were in bloom.  Her favorite was the moonflower that only opened at night.  I excitedly exclaimed that was mine too.  I told her how I loved sitting on the porch swing at night watching these large white flowers open up in the moonlight.  I could imagine her there and how fun it would be have her as my friend. 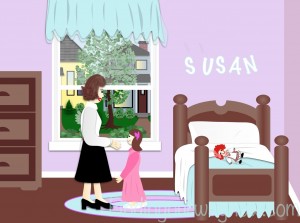 I was starting to get a bit tired of standing. She said I should lie down on the bed.  I did that.  I watched her for a while as she flew from window to the outside bush and back … and then … I woke up.

I looked frantically for my fairy.  She was gone; nowhere to be found, I was so upset.  Mom came into the room and asked what was wrong.  I was afraid to tell her for fear that I would share the secret.  In the end, I told my Mom about the fairy.  Mom listened and stroked my hair with a sad and concerned look on her face. She said maybe my fairy would return the next time I was to take a nap.

As I grew older, I realized that it was a child’s imagination that was at play.  Regardless, it was so very real to me.  I can still see that beautiful little fairy in my minds eye to this day. 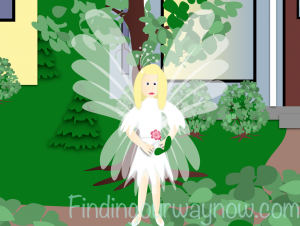 I believe that a child’s imagination is a wondrous and beautiful thing.  Wouldn’t it be nice if we could maintain that wonder as an adult?

Have you ever had a memory from your childhood that gives you pause?  One that is as clear today as if it just happened?  I would love to hear your story.  🙂