Craft beer is a passion with Patrick from “Crafty & The Beast”.   I truly believe 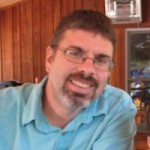 you will enjoy his latest offering.  If you take a moment and go to Patrick’s site you will find my wine post about “Van Ruiten Pinot Grigio 2010” from Lodi California.

Now, I’ll let Patrick take it from here and tell you about a craft beer or two 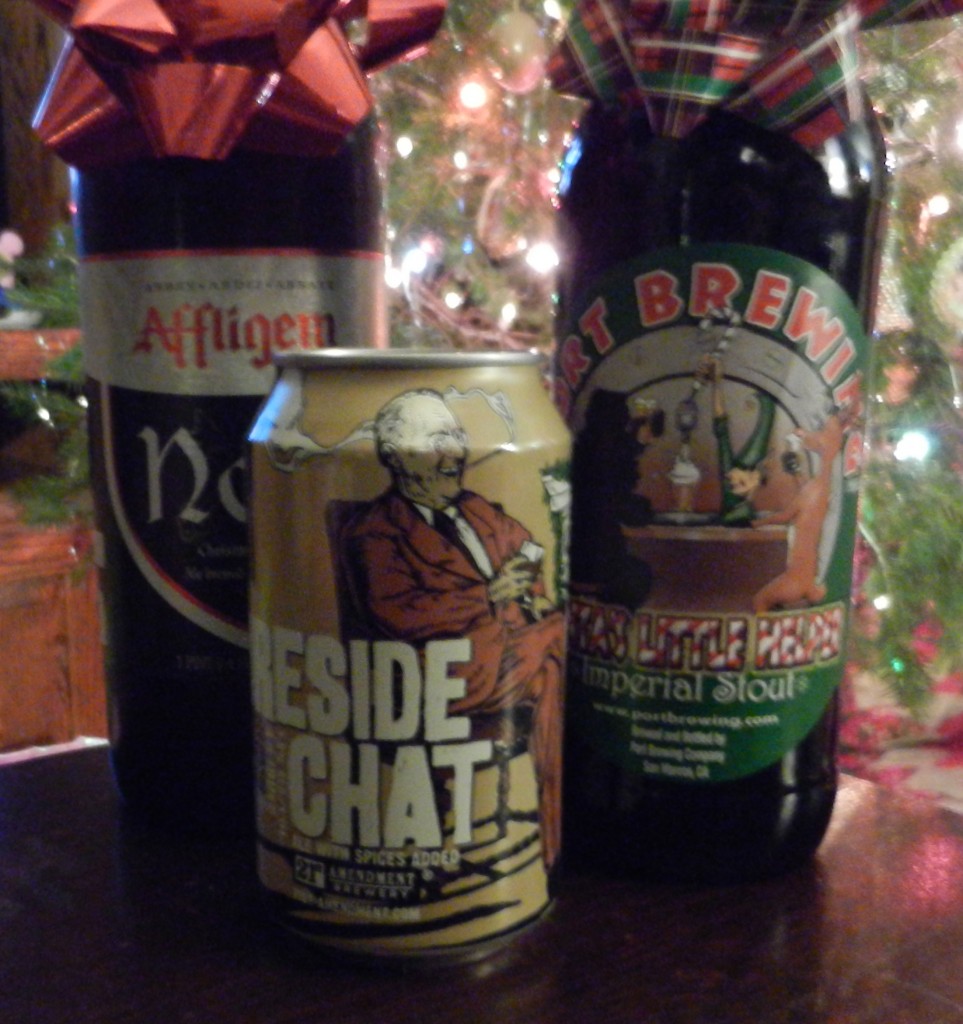 The season for giving, celebrating and sharing. This is a great and fun time for craft beer. The beer stores are full of holiday and winter ales. This is where the brewer can be quite creative. There are no rules for winter and holiday beers. Some brew strong ales with holiday spices, others brew rich dark beers such as Imperial Stouts. The labels and names can be quite festive and pretty humorous such as Santa’s Little Helper and Yellow Snow.

Holiday ales make a great gift or a partner for holiday feasts. Here are a few I have purchased to get me through the tough winters and Yuletide Tide season.

Belgium border between the provinces of Flemish Brabant and East Flanders. The Abbey has quite a long history. First formed in 1074 with six knights establishing the monastic order of the Benedictines. Affligem survived wars of religion and independence and of course the French Revolution. The Abbey was ruined several times forcing the monks to escape. This didn’t, however, stop the monks from returning each time.

Affligem Noel is a dark, Belgium Ale. It is a dark amber with dark fruits such as prunes and raisins with notes of spices. The carbonation is soft, and the ale is full bodied. I recommend you enjoy this in a brandy snifter or Trappist glass.

21st Amendment Fireside Chat. San Francisco, California. The 21st Amendment, as you may know, was the repeal of prohibition allowing us to enjoy our favorite libations once again. The name of this beer comes from the Addresses or “chats” Franklin D Roosevelt would give the nation through radio broadcasts. The President 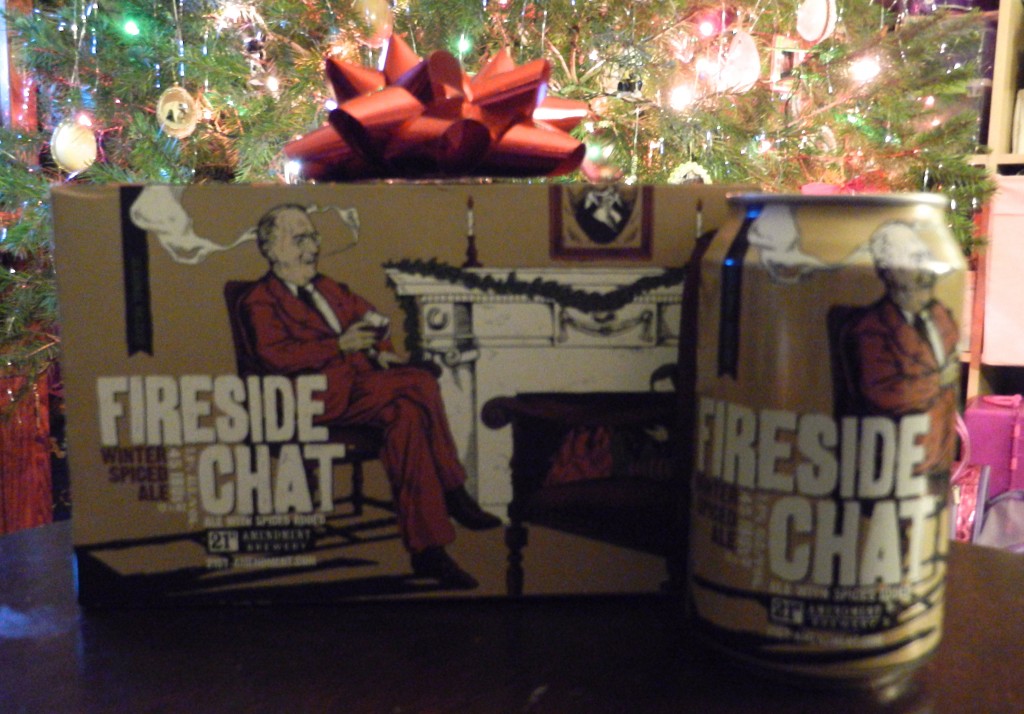 gave 31 of these chats that covered current American issues.

Fireside Chat. At 7.9% ABV, this dark English ale is warm and rich with hand selected spices and cocoa nibs. Quite a spicy ale with dark fruits and a warm finish. Fireside Chat comes in six pack cans but don’t be fooled into believing canned beers are inferior. 21st Amendment brews are top notch beers worthy of any craft beer lover, and the craft of their beer cans says it all. 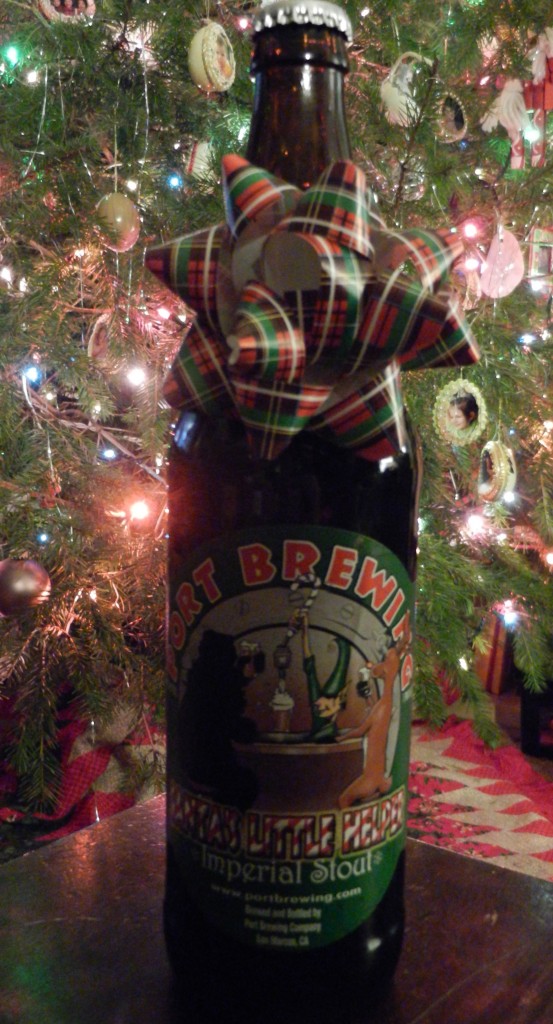 Vince and Gina Marsaglia were brewing at home and decided to share their passion with their customers, so they served their first hand crafted brews in 1993. They would go on to open two more Pizza Port brew pubs and finally opened The Port brewery in San Marcos, California.

Santa’s Little Helper. Santa has been delivering toys all over the world in one night and needs a little more than just milk and cookies. How about treating him to a rich Imperial Stout and warm him up with a full and creamy bodied, chocolate and coffee bomb. Oh, and pour yourself a glass. After all, you have been up all night helping Santa too.

What special gifts do you like to bring to all the holiday festivities?

I do hope you enjoyed what Patrick had to share about craft beer.  We would love it if you would take a moment to leave a comment or two and let us know what you think.  Oh, and don’t forget to check out my “Van Ruiten Pinot Grigio 2010 Wine and Winery review” on Patrick’s site, as well.  While you’re there, check out some of the great things he has going on. Enjoy.

Time for a pint, craft beer that is…

PS: What are some of your favorite wines? If you would like to write a guest post about an experience, I would love to hear from you.