I had written this story about a Halloween scary house awhile back and thought it worthy enough to republish it at this time.

I love Halloween. For me, it is a non-holiday that is all about fun. We get to dress up and pretend we are someone or something else, eat our favorite candy, ooh & ah over all the little ones who are in costume. If we’re lucky, we’ll have a ton of trick or treaters come to our door on this Hallow’s Eve. What is there not to like about that.

As Halloween approaches it triggers many memories, my real treasure. As always there is one memory that always stands out from all the rest. 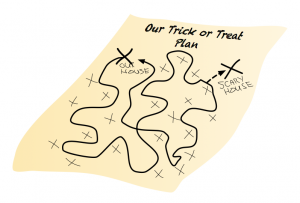 It was a beautiful fall. The fall leaves were late and had not yet turned, but everyone was anticipating a brilliant show of color. The apple orchards near where we lived were heavy with a bumper crop of apples, and the newly pressed apple cider was proclaimed to be the best ever. I was eight years old and couldn’t wait for Halloween. I would always plan and prepare my homemade costume with the enthusiasm of a fashion maven. Every detail had to be just right. Much to my mother’s consternation, I wouldn’t settle for anything other than perfection. My brothers and I would plan our trick or treating route with the precision of a major campaign to make sure we hit the best places for the “Good Stuff”. The best news of all was that Halloween was on a Friday night, which meant we didn’t have the encumbrance of school the next day. It was stacking up to be the best Halloween ever.

At eight years of age, time always seemed to move at a snails pace, especially with holidays like Halloween. The big night would and did finally arrived. We deemed our costumes to be awesome and couldn’t wait to wear them. We lived in a small country town where everyone knew each other by first name. Because of that my brother and I were allowed to go out on our own with the whole evening to ourselves to hit as many houses as possible within the hours allotted. My littlest brother was going out with my Dad to the neighbors near our home while our Mom stayed home to hand out treats to the hordes of Halloweeners. The hours for trick or treating were set from 7 – 9:30pm. It was 7pm. We were in costume, and we had our plan. 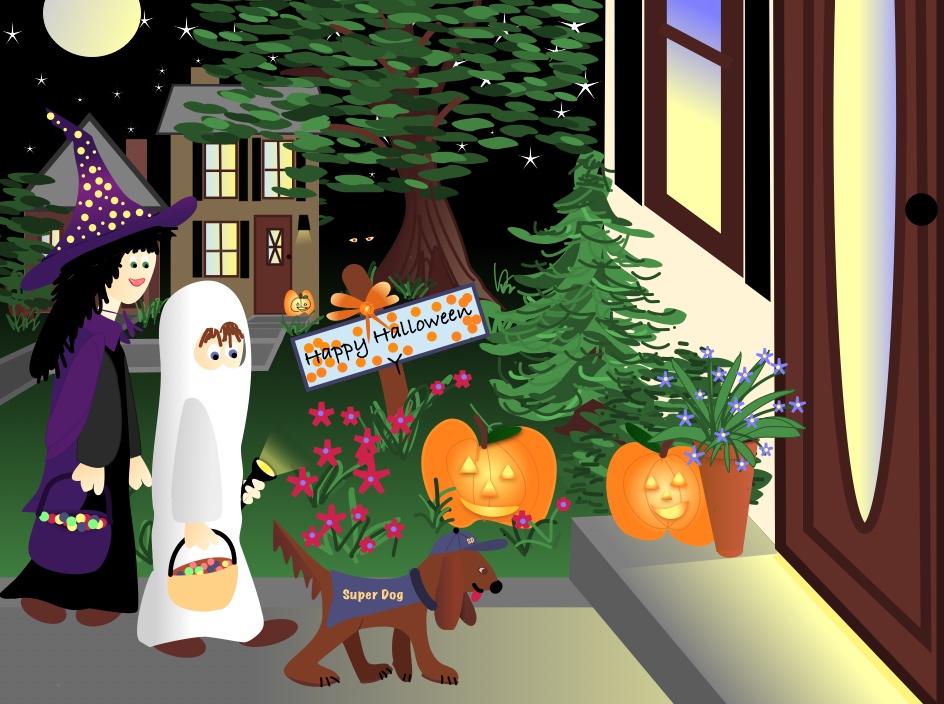 It was a gorgeous night, not too hot and not too cold. The moon was full. The air had that cool, crisp feel with the smells of apples, cinnamon, and evergreen that only our memories can recall. We had walked for hours and had filled our treat bags almost to the brim. In kid vernacular, “it was a good haul”. Our plan had been so successful that we had a little over an hour before we were to return home. So we decided to check out a street we had not yet visited. 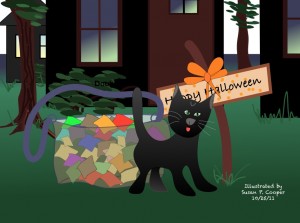 Every small town has a Scary House that no kid in their right mind would EVER approach, much less on Halloween. I will never know what makes a house scary, but all kids know when they see one. This Scary House was on the last street; we decided to try before heading home. Most of the houses on that particular street had their outside lights on, signaling we were welcome to approach. We were now at the end of the street; the Scary House seemed to loom over us, dark and foreboding.

My brother and I stared at the Scary House for a bit discussing whether we were brave enough to approach it. We had just seen a couple of kids race off from that very house as if they were on fire. Common sense was telling us not even to think about knocking on the door of that very Scary House.

I can’t tell you why it was, but there we were approaching that Scary House, walking VERY slowly towards that black, ominous door. Just before we touched the front step, the front door flew open and what stood before us was the BIGGEST man I had ever seen. I mean he was a GIANT. We gasped and stood there for a moment, not sure whether we should run for our lives or approach so we did what any kid would do, we froze. 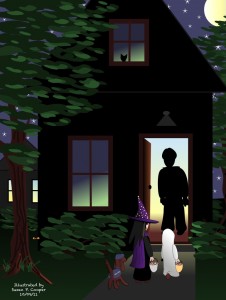 Then the Giant spoke in a loud, gruff voice. “I SUPPOSE you expect a treat, or you’ll trick me, is that right?” Wide-eyed; we shook our heads affirming he was correct. The Giant spoke again “Well come on in and we will see what we can do.” My brother and I looked at each other and then the Giant spoke again while putting his arm around us gently guiding us into the house. “Come on, come on, hurry on in, times a wasting.” Well, now we were in for it. We had no choice but to do what the Giant said.

The Giant lead us into his kitchen, where his wife was waiting. He told us to set down at the kitchen table. At that point, I was starting to think we were in a Hansel and Gretel movie, and we, the kids, were in REALLY big trouble. I remembered the other kids that had been running from the house and wondered if maybe we should have done the same. A few thoughts flashed through my mind; “Are we going see our home ever again? Will Mom and Dad know where to find us?” Then I noticed the most amazing and delicious smell, confirming my Hansel and Gretel suspicions. The Giant smiled the biggest and gentlest smile with a warm laugh that seemed to defy his size. His wife, with a gentle voice and a pat on our backs, complimenting us on our outstanding costumes and then placed a cup of hot spiced cider before my brother and I along with some huge freshly homemade cinnamon donuts. Our fears instantly melted away. 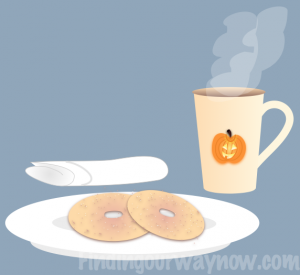 The Giant and his wife introduced themselves as Harry and Mildred. As we scarfed down the donuts and cider, they asked the typical questions adults asked kids.  They asked bout how we had fared with our treats, what houses and streets had we visited, did we like our teachers, our hobbies and what we liked about our town. The cider and donuts were the most amazing thing I had ever tasted. To say they were the best thing I had ever eaten would have been an understatement. They knew our parents and asked about them. We learned it was their custom to leave the lights off. Any kid was brave enough to approach the Scary House on Halloween would be rewarded with a very special treat. After all, any kid that had the courage to approach the Scary House deserved a reward. It was the best treat we could have ever imagined. They did ask for one thing, to keep their secret and hoped we would come to visit next year. We vowed to keep their secret with the cross your heart and hope to die kind of pledge. As we were leaving the Scary House, Harry, our Gentle Giant, handed each of us the biggest candy bar we had ever seen. It WAS the best Halloween any kid could ever have had.

We never shared their secret, except with our parents. As it turned out we did return to that not so Scary House every year until such time where we had outgrown trick or treating and had moved on to other things.

As the years pass I see fewer kids come to our door, but I still look forward to seeing the ones that do, all dressed up, pretending to be something different for that one night. It saddens me that it is not as much fun for the little ones as it was when I was their age. The fact that there are individuals who seem to get some warped sense of enjoyment in causing trouble or doing harm on Halloween is something I will never understand. I do so mourn the loss of that innocent time.

When I think of that Halloween, many years ago, I can still smell the hot spiced cider and freshly made cinnamon donuts and remember the warm generosity of Harry and Mildred. What that gentle giant and his wife taught me, on the scary and fun night, was appearances can be deceiving. We just never know what adventures or rewards awaits when we have the courage to open the door to all life’s adventures.

What are your favorite Halloween memories?

If you liked this, check out Fortune Cookie, A Father’s Advises and Fear – A Four-Letter Word. What are some of your favorite story?