Aw, how I remember Halloween discovered. For many years, we had hosted nine foreign exchange students. My husband and I have both agreed we gained

much more from our experience with these students than we would have ever thought was possible. Among the many things, we learned our holidays were very foreign to them in just about every way possible. That included the ones you would think would be very familiar, such as Christmas. It was a great adventure for them and us.

That brings me to my story; Halloween Discovered. Halloween is a big deal here. In some countries, it’s a holy day, in others, it’s a time to be feared or little more than a curiosity.

So here, is my Halloween story:

There was the year we found ourselves with two students, both girls, one from Albania, the other from Holland. How we came to have two students is a story for another time. These two girls were yin and yang; they couldn’t have been any more different from each other. One was a girly girl, into fashion, chatrooms and was a gifted socialite with poor grades. The other was an athlete who spent all her time on the soccer field, running track or a running a local race who did well in school. Because there were two students, it had taken a bit longer to get everyone settled into a routine and not feel so out of place. Both students were very bright, spoke multiple languages and, of course, were fluent English speakers. Being teenagers, and with all the attitudes to go with it, they thought they had it all figured out.

It was late September early October, and both girls wanted to know what Halloween was. All the kids in school were talking about it, and they simply couldn’t get what all the fuss was about. We explained what it was and how much fun it was when my husband and I were kids. One of them said; “So it’s a (stupid) kid’s holiday” with a smirk on her face. I could hear them both thinking “not interested”.

I decided to decorate for Halloween that year to give the girls a total picture of Halloween. They expressed little interest, and you could tell they thought the decorations were kind of interesting, but it was just a dumb American thing. Remember they’re both teenagers.

It was now mid-October, and all their new school friends were abuzz about their plans for

Halloween. The girls thought maybe they should figure out a costume to wear to school on Halloween since their new friends were participating. We worked out costumes they both felt ok wearing. One was a fashion model the other was a soccer player. It wasn’t all that original, but, at least, they felt they wouldn’t be the odd-man-out who hadn’t participated at school.

Halloween night had arrived. It was on a Thursday that year so there weren’t any parties until the weekend IF the girls choose to attend. Whether they were going to the parties, was still very much in question. We had dinner early that night to make sure we were ready for the trick or treaters that we expected to start arriving around 6:30 pm. The girls were NOT interested.

We had an enormous bowl of candy by the door and had scary Halloween music playing for affect. The girls rolled their eyes and said, “how dumb”. Our family room was in the back of the house, So to keep from going from the back of the house to the front door; we sat in the living room by the door. The girls had absolutely no interest what so ever in this Halloween thing. One was on the computer up stairs; the other was watching a sports event on TV in her room.

We asked them to come down and wait with us for the first few trick or treaters. After that, if they weren’t interested, they could go back to what they were doing. It was obvious that this was not what they had planned for the evening. Both girls grumbled but complied.

It didn’t take long before the first trick or treaters arrived. The doorbell rang, it was a nosy group but, you could tell by the voices that they were relatively young. I asked the girls to come with us to the door. I gave one of the girls the candy bowl to hold while we opened the door. Out rang “TRICK or TREAT” from a cacophony of witch’s, pirates, fairies, cowboys, spidermen and many other make-believe characters. The kids were as cute as they could be. I ask the question you ask, made a big fuss over the kids while the two teenage girls looked on. I placed the same amount of candy in each kid’s trick or treat bag, wishing them Happy Halloween and they were off to the next house. You could hear the reframe; “TRICK or TREAT” ring out from other nearby houses. I could tell that it was going to be a very busy night by the sounds coming from the street. 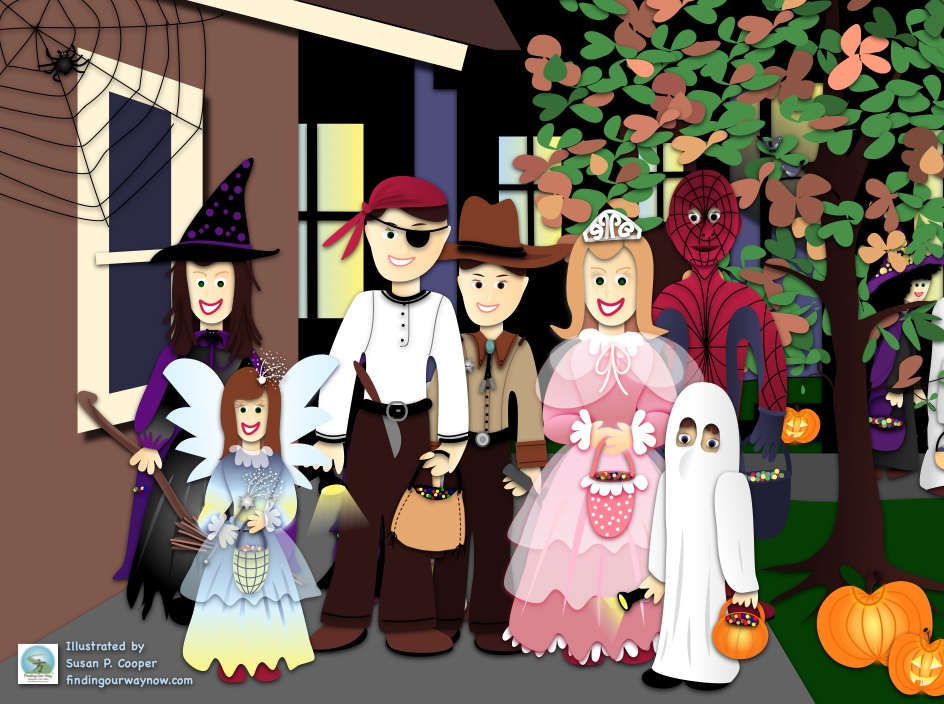 We turned around to talk to the girls. Their eyes were wide, and they were full of questions. How long does this last, does this happen every year and do all the kids dress up like that? It was quite a stream of questions. We laughed and answered all their questions. We let them know they could go back to their other activities, now that they had a chance to see what this was all about. They looked at each other and went back to what they had been doing. My husband and I then sat down to wait for the next group of trick or treaters.

It was only a few minutes before the next group arrived. The doorbell rang, in dashed the girls from different directions 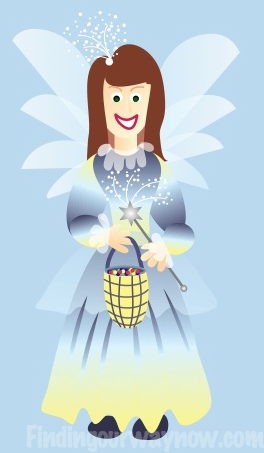 almost colliding into each other. They told me “they had this” and proceeded to have a great time. I’m not sure who had the better time the trick or treaters or the girls. They actually fought over who would answer the doorbell next. By the time 8:30 pm arrived, and all the trick or treaters were gone, disappointment was clearly registering on the girls faces. They sat in the living room babbling on about all the costumes, what they liked the best and how cool that was; go figure.

They had never seen anything like that before and were not prepared for the whole experience. When they took a moment to reflect, they both agreed that maybe this was one of the coolest things they had done since their arrival in the US. They loved the little kids and their costumes.

That’s when they decided that, just maybe, the Halloween parties they were invited to might

actually be a lot of fun. They seriously got into making costumes that would be fun to wear to the parties.

Halloween heralds the beginning of the holiday season. After Halloween, the girls were much more interested when we asked them to be part of some of our traditions.

Did this occur with every one of the students we had? The answer would be yes. As the years have passed we have been lucky enough to stay in touch with some of the students. Whenever October comes around, they ask us about Halloween.

Each of our foreign exchange students holds a special place in our hearts. They gave us an opportunity to learn about another world and culture in a very personal way. These students gave us a unique opportunity to see our world through different eyes. We learned to appreciate all that we had and better understand our own unique traditions.