I’ve never lost the excitement as summer approaches. I’m reminded of the feeling I had when the school year was coming to a close and summer vacation was at hand. The excitement from all the kids in my school was palpable. This time of year also reminds me of an event that encompassed spitballs.

I was in fifth grade and spring was closing in on summer. The teacher was having a very hard time keeping us on task and holding our attention. Lunchtime was bedlam and it was then that I learned about spitballs. What are spitballs? They are bits of paper moistened with saliva and formed into a ball that fit into a straw. Once the ball was loaded in the straw, you blew on it and it would shoot across the room to its intended target. The lunchroom and playground were a mass of flying spitballs. The one who had spitballs down to a science was my classmate, Jerry. 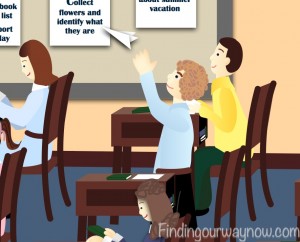 Jerry was a bit quirky, always unkempt, and reminded me a bit of Pigpen from the Charlie Brown cartoon. He had a bright mind, always coming up with some strange, fun and funny ideas.

Our teacher was a bit of a curmudgeon and had little patience for us or Jerry and his ideas. What made it even harder was she gave us many assignments, which were a repeat of what we had already learned; busy work to keep us occupied. I do believe she was just as anxious for summer recess to begin as we were.

As the school year was coming to a close, my classmate, Jerry, had an idea. He hadn’t shared it with anyone, but we figured it out soon enough. He made a big pile of spitballs and put them in a cup. Jerry stashed his collection of straws and spitballs in his desk.

When the teacher wasn’t watching he would moisten the spitballs and shoot them up to the ceiling where they stuck and stayed. Over the course of the next week or so the collection of spitballs on the classroom ceiling was growing quite large, but they never fell down. 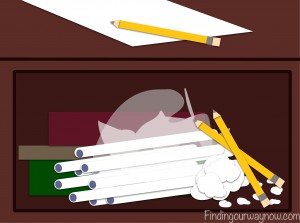 Then he started to throw wads of wet toilet paper or napkins up to the ceiling, using a cup of water and a stash of papers for that purpose. These globs of paper also stuck to the ceiling. When the teacher turned her back, we would watch in amazement, as up from Jerry’s desk spitballs of all shapes and sizes would fly. The ceiling was littered with spitballs or gobs of paper, and they just stuck there. 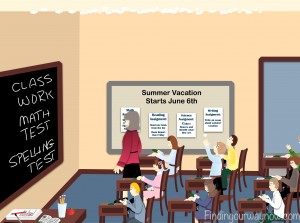 Into the second week, the weather warmed and the windows were opened to allow the air to flow. All the while spitballs would fly when the teacher’s back was turned. It was too funny and we had a very hard time not laughing. When we did, she would shush us and go about whatever she was doing. More spitballs continued to fly.

It was getting warmer and we were more and more restless.  We were a week or so from the end of the school year. Our teacher was walking up and down the aisle making sure we were doing our lessons (busy work). It started snowing. Just a little at first. Our teacher seemed unaware of the strange occurrence. Her hair was collecting bits of the strange snow. 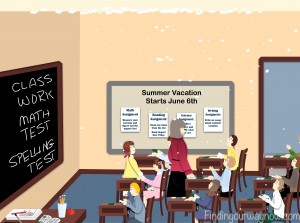 We stared and then in unison we all looked up. The spitballs were starting to come loose. The ceiling was covered and the snow started to fall even more so. At first it was just tiny pieces of paper, but then the size and volume of the snow began to grow. The first big one hit the teacher squarely on top of her head. She still didn’t notice. We started to giggle, and then we laughed. The big spitball was sitting on top of her head and she still didn’t realize it.

All of a sudden, it was as if the whole ceiling caved in and paper was everywhere. Our teacher looked around in bewilderment and we were in an uproar of laughter. Then she looked up. Mind you much had already fallen, but there were many spitballs still waiting to fall. Then one fell hitting her on the face and we lost it. Her face went from bewilderment to curiosity to surprise to amazement to anger in a flash. We laughed even harder.

Paper was flying and so was our teacher…  straight out the door to the principal’s office. We were in stitches when the principal walked in with our teacher. His look of astonishment made us laugh even harder. Then he started to laugh. Our teacher was not amused.

It was close to the end of the day. The principal sent us out to the playground. The janitor was called and the floor and ceiling were cleaned and scraped. 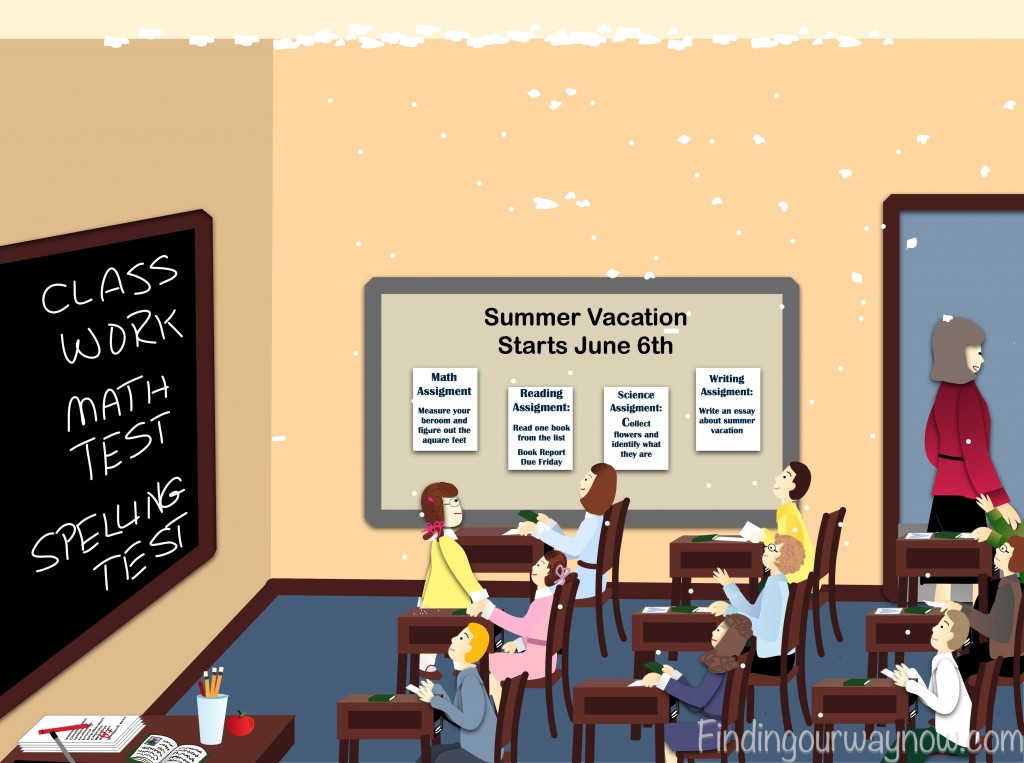 Jerry went on to do many more interesting and funny things like this. To me, this one antic of his was my favorite. He ultimately became an engineer with a number of patents of note.

Those were innocent times and they have given me much to remember and to be thankful for. It has taught me to not take things too seriously. It sure helps when we pay attention to what’s happening around us. Looking up in our very busy lives is important; we just might find a few surprises when we do. 🙂

Do you have a few fun childhood stories from your early school years? Did they offer some surprises and a few laughs? I would love to hear your story.

If you liked “Spitballs Snow In Classroom 10”, check out Revenuers, Adult Water and Sad Kitty Tale.  You also might like my book on Amazon that encompasses many of my stories. Enjoy.