I am very lucky to have “A Man and His Pan”.  I have the most amazing husband who is majorly into food and cooking.  Is that all he likes?  Not by any means.  He also likes anything sports and is a die hard Ohio State Buckeye fan.  For this post I will stick to his cooking interest.  He loves to play in the kitchen.  Over the years he has become an amazing self-taught chef that has the innate skill to create his own recipes. 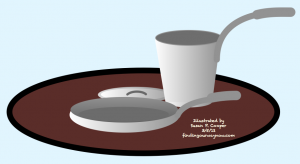 Because my husband likes to experiment with different ingredients I naturally am the taste tester for his creations.  In the beginning some of his experiments were less then appetizing.  But as time has passed, his skills have improved greatly and that has contributed to my weight increase.  That is another story for another time.

As it is with anyone who is into cooking, he has gotten into the tools needed to make the best dishes and cook everything to perfection.  He has researched cookware and their different properties with various metal plys and their conductivity, knives that are well balanced in your hand and dangerously sharp, cookbooks of every imaginable subject and source and an amazing array of gadgets. 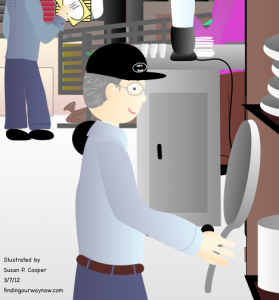 Many times my husband will be in a cooking store or department and will run into a person who appears to be struggling with what to buy.  He will offer assistance and give them chapter and verse regarding the ventures of each style, type and brand of cookware.  I’m not sure that many of these people were prepared for the information they received or thought possible but my husband would be in his glory and they would listen with rapt attention.  Through much conversation, asking and answering questions he would make a recommendation and the person would walk away with what he has deemed a good choose for their particular need.  While this was going on, the store personnel would look on with a knowing smile, understanding that he would effectively sell their customer something that would makes sense, which would be much better then they could have ever done.

What all this has lead up to a frying pan  fetish.  Yes, you heard me right.  My husband has an obsession with frying pans.  He can’t pass up a really good looking or inexpensive frying pan.  We have a collection that would rival any cooking store inventory.  We have a nice home that has a good amount of storage, but we are running out of room.  In order to allow for better organization we need to give away or sell some of our inventory and to be fair some of my stuff as well.  The problem is when we let go of a few pans, a few more (new) ones magically show up.

Man and His Pan

We are Costco shoppers.  It was a Saturday and the store was a zoo.  We had arrived and had made a decision to split up.  I, armed with my list, headed into the den of craziness and my husband headed off to the cookbooks and cookware section.  I had fought my way through the kamikaze housewives, darting and crying kids, families and people who would block the aisles to get what I had on my list.  I hadn’t heard a word from my husband who would usually hunt me down to put something in my basket, usually a cook book or cooking utensil of some kind that he thought would be fun to try.

I had finished with my list and had text my husband to let him know that I was headed to checkout and had a really funny story about an aisle blocker and a really big guy who had helped me out.  I was almost to checkout when he appeared with nothing in his hand.  Because the store was so crazy busy I never thought to ask if he had found something of interest.  I had assumed he hadn’t.  As we were checking out, he decided that it would be nice to get a frozen yogurt so he went on ahead to buy one and find a place to set while I completed our purchases.

So there we were sitting and eating our frozen yogurt having a nice conversation about what the rest of the weekend entailed.  That was when I asked about the cookbooks and cookware.  He smiled and shrugged his shoulders and said there were some interesting things and described a new cookbook he almost bought and left it at that.  We finished up our yogurt and headed out to the car.  As we approached the car he said he needed to tell me something.  As we wheeled the shopping cart to back of my SUV that was when I noticed a very large box in the cargo area.  I looked at the box and then at my husband with a questioning look on my face.  He said “I found this really great set of Green Pans that are usually very expensive.  The price was really, really  good so I went ahead and bought them and put the box in the car while you were shopping” and then he gave me a really, really BIG smile.   I burst out laughing because I had actually thought we would make it our of the store without a frying pan instead we now had a whole set of new cookware.

I do so love my husband.  He truly is a man and his pan kind of guy.  I am hard pressed to discourage his interest because he so much enjoys buying and using each pan.  Some he deems better then others.  We are making an effort to reduce our current supply of pans.  Some of our friends have been and will be the lucky recipient of some of our inventory.  In any case all of this plays very nicely into my blog.  So don’t be surprised if he shows up as a guest writer on my blog in the future.